2006 Hall Curatorial Fellowship Exhibition. This exhibition considers the effects of what happens when one sense is replaced by another, with particular focus on hearing and seeing. On view Joseph Beuys/Ute Klophaus, John Cage, Janet Cardiff and many more. Curated by Thomas Trummer. 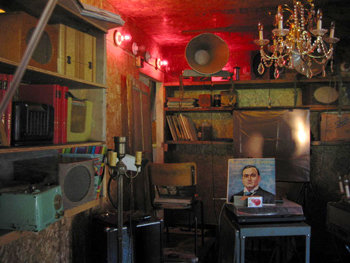 The Aldrich Contemporary Art Museum is pleased to present Voice & Void–curated by Thomas Trummer, the first recipient of the Hall Curatorial Fellowship. Voice & Void will debut on Sunday, September 16, 2007 and remain on view through February 24, 2008.

The human voice has become a major subject in recent scholarly debates, so it is no coincidence that an Aldrich exhibition will explore the topic from an artistic vantage. In Voice & Void, Trummer will utilize the state-of-the-art sound facilities in the Museum's building to illustrate how voice–and the absence of voice–can be expressed by the visual arts.

With Voice & Void, Austrian native Thomas Trummer, will consider the effects of what happens when one sense is replaced by another, with particular focus on hearing and seeing. Trummer’s exhibition will feature both commissioned and loaned contemporary works of all media by a diverse group of international artists–including a sculptural aviary that will house two living parrots that speak the long-lost language of May-po-re!

The exhibition reception will take place on Sunday, September 16, 2007, from 3 to 5 pm at The Aldrich with a 2 pm: Panel Discussion featuring Thomas Trummer, curator of Voice & Void, along with artists Rachel Berwick and Julianne Swartz and philosopher David Goldblatt, author of Art and Ventriloquism. The Museum is located at 258 Main Street, Ridgefield, CT. Round-trip transportation from New York City is available; please call the Museum at 203.438.4519 for reservations.

The Hall Curatorial Fellowship, made possible by the generous support of Andrew and Christine Hall, is a biennial program intended to bring an international perspective to the Museum's curatorial practice. It also offers an exceptional opportunity for an international curator to gain curatorial experience in a United States museum setting, and to support the professional development of curators.