The story of photography's extraordinary success and popularity in Austria, Czechoslovakia, Germany, Hungary, and Poland between the two World Wars. The exhibition is divided into 8 thematic sections and includes more than 150 photographs, photomontages, books, and illustrated magazines by recognized masters such as El Lissitzky, Laszlo Moholy-Nagy, and Hannah Hoch, as well as lesser-known contemporaries Karel Teige, Jaromír Funke and others. It includes Related Film Series. 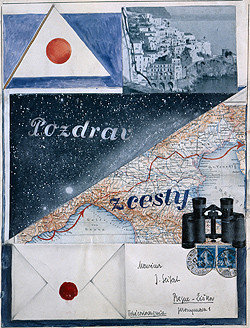 From October 12, 2007, to January 9, 2008, the Solomon R. Guggenheim Museum presents Foto: Modernity in Central Europe, 1918–1945, an exhibition that explores photography in central Europe between the two World Wars.

In the 1920s and 1930s photography became a phenomenon of immense proportions across Germany, Czechoslovakia, Hungary, Austria, and Poland. It fired the imagination of hundreds of progressive artists, provided a creative outlet for tens of thousands of devoted amateurs, and became a symbol of modernity for millions through its use in magazines, newspapers, advertisements, and books. Most crucially, as this exhibition will argue, it was in interwar central Europe that the history of photography as a modern art form was established. Through a series of thematic sections, this survey explores the uses and theory of modernist photography in 170 original works and printed materials from the central European region. This groundbreaking exhibition, organized by the National Gallery of Art, Washington, D.C., is the first to bring together recognized masters such as El Lissitzky, László Moholy-Nagy, and Hannah Höch with their lesser well-known contemporaries Karel Teige, Jaromír Funke, Stefan Themerson, and Kazimierz Podsadecki, amongst others, attesting to the range and dynamic output of the era.

Foto: Modernity in Central Europe, 1918–1945 is divided into eight sections, each of which compares local differences against a heritage of shared institutions and attitudes towards modernity: The Cut-and-Paste World: Recovering from War; Laboratories and Classrooms; New Women—New Men; Modern Living; The Spread of Surrealism; Activist Documents; Land without a Name; and The Cut-and-Paste World: War Returns.

Catalogue
The exhibition catalogue, Foto: Modernity in Central Europe, 1918–1945, written by Matthew S. Witkovsky, is published by the National Gallery of Art, Washington, D.C., in association with Thames & Hudson, London and New York. It includes an introduction by Peter Demetz, professor emeritus at Yale University; biographies of the artists; an extensive bibliography; and maps of the region showing the geopolitical shifts of the early 20th century. The 310-page publication with 192 color and 59 black-and-white illustrations is available from the National Gallery of Art by phone at 202 842 6002 or 800 697 9350 ($60.00 hardcover, $45.00 softcover).

PUBLIC PROGRAMS
The following programs are held at the Solomon R. Guggenheim Museum. Unless otherwise noted, tickets for Public Programs are $10 ($7 for members, students, and seniors). For updated information regarding ticketed programs, contact the Box Office at 212 423 3587, or at boxoffice@guggenheim.org.

Lectures and Tours
On Tuesday, October 16, 2007, at 6:30 p.m., Matthew Witkovsky, Assistant Curator of Photographs at the National Gallery, Washington, D.C., considers central Europe’s many achievements in photography, and the importance of photography to modern life in that region. Sports, depictions of gender, Surrealist experimentation, and photomontage were all explored during this tumultuous era, when recently founded nations and dismantled empires alike were searching for their place in a new world order. A reception will follow.

On Tuesday, January 8, 2008, at 6:30 p.m., internationally-acclaimed conceptual artist Christian Boltanski speaks on his expansive body of work, in which he examines the collision of the personal and social, as well as the intersection of memory and archival documentation in shaping our vision of the past.

Works & Process at the Guggenheim
On Sunday, December 9 and Monday, December 10, 2008, at 7:30 p.m., Works & Process at the Guggenheim presents Dada, Jazz, and the Avant-Garde, a program curated by pianist Sarah Rothenberg. Erwin Schulhoff's Jazz Etudes, Paul Hindemith's Trio for piano, viola and saxophone, Stefan Wolpe's Dadaist For Anna Blume by Kurt Schwitters, and rarely heard works by Webern and Dessau are performed along with Jurt Weill's Berlin Songs and Bartok's Contrasts. Violinist Joel Smirnoff and soprano Lucy Shelton join Rothenberg, among others. Foto curator Matthew Witkovsky moderates a discussion. Tickets are $25 ($20 for members, $10 students). Foto will be open prior to and following the performance.

Admission and Museum Hours
Admission is $18 for adults, $15 for students and seniors (65+), and children under 12 are free. Please note that portions of the museum are currently closed during the restoration process. The museum is open Saturday to Wednesday, 10 a.m. to 5:45 p.m., Friday 10 a.m. to 7:45 p.m. The museum is closed on Thursday.

A program of short and feature-length experimental, documentary, and narrative films from Germany, Czechoslovakia, Hungary, and Poland accompanies Foto: Modernity in Central Europe, 1918–1945. Film screenings at 2 and 4 p.m. are free with museum admission; 6:30 p.m. screenings are $10 ($7 for members, students, and seniors). The film series was organized by the National Gallery, Washington.