The End. The project is both social/political and visual continuation of many of the themes first addressed in the artist previous show. The star-shaped painting/collages are again present, though on a larger scale, along with the nuclear imagery. 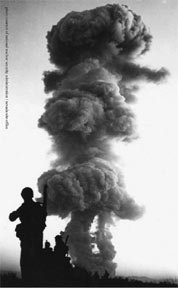 Edward Lightner’s latest exhibition, The End., at L2kontemporary, is both social/political and visual continuation of many of the themes first addressed in his previous show, also at L2kontemporary, Pay your Respects to the Vultures. The star-shaped painting/collages are again present, though on a larger scale, along with the nuclear imagery. This time, however, the paintings themselves are larger, thicker and lusher. Each one starts with a particular color, and then increasingly moves through lighter pastel versions until the overall effect is akin to that of ice cream or holiday candy. Attached to this visual sweetness is assorted Christian kitsch imagery and quotes from the Bible, all built upon abstract nuclear imagery.

The viewer will also have the opportunity to see Family Photos, a work consisting of images created from the detonation of “nuclear love devices,” (from which the star-shaped paintings are derived) in the form of a large, variable size photo assemblage installation. The installation highlights a number of “family images” produced from many of the numerous nuclear explosions detonated by the US over the last 60 years. Through these sublimely beautiful images, one must wonder if “The End.” is not almost here. The End. runs from October 13 thru November 11, 2007, with the artist’s reception on Saturday, October 13, 7 – 10 pm.