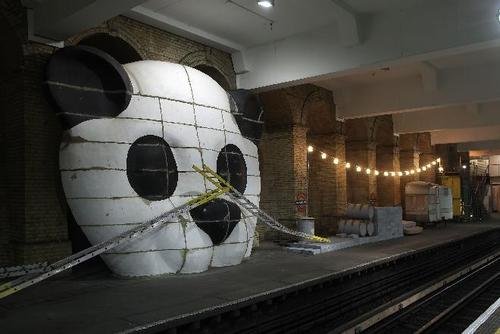 In Autumn 2006, A Foundation launched Greenland Street – three former industrial buildings that have been transformed into inspiring and challenging gallery spaces while retaining their historic character and industrial heritage. Located in the heart of Liverpool’s old port area and moments from the River Mersey, Greenland Street comprises The Coach Shed, The Furnace and The Blade Factory.

All three buildings have recently undergone a two phase programme of redevelopment works, which has improved access and created a centralised café and reception space alongside the provision of disabled toilets. In 2007, A Foundation further developed Greenland Street with the creation of five studio spaces and a specialist arts bookshop.

Greenland Street’s mission is to deliver programmes of activity that showcase the very best local, regional, national and international contemporary visual arts practice and we plan to commission up to four major new projects each year. In addition to our visual arts programmes, A Foundation also delivers an annual architecture commission that profiles emerging architects whose hybrid practices reference both art and architecture, and an education and outreach programme that aims to provide a wide range of participants with the opportunity to look at, talk about and make art.

SIMPARCH have transformed the industrial proportions of The Coach Shed with drum 'n' basin a large-scale
architectural intervention which includes Free Basin - a large elevated kidney shaped facsimile of a domestic west coast swimming pool and a 40ft long, 6m high full pipe, who's impressive structure echoes a hull in dry dock. The installation will then be offered to skaters.

The Only Living by Brian Griffiths is A Foundation's Furnace Commission for 2007 and is the result of months of intensive work by the artist who has used this unique space as both a studio and muse. The Only Living draws on the devices of showmanship from theatre, sideshows and certain sculptural traditions that exaggerate scale and manipulate perspective. Griffith's monumental creations are portals for adventure. His conceptual rigour is bound up with the process of making, so that everyday objects are selected for their potential for fantasy and transformation.

A Foundation working in collaboration with Vizcaya Museum, Miami and The Walker Arts Centre, Minneapolis have commissioned a new film work by Catherine Sullivan. Triangle of Need will have its European premiere at Greenland Street as part of the Autumn programme. Working with composer Sean Griffin, choreographer Dylan Skybrook and Nigerian actor and Director Kunle Afolayan, Sullivan creates a complex, nuanced story about evolution, class, wealth and poverty that highlights the inequalities and injustices in our global economy.

Mustafa Hulusi will exhibit six newly commissioned paintings, alongside existing works which form part of the Elysian series depicting fruit and flowers. Hulusi constructs photographic images and transforms them into hyper-real paintings that have a distinctive and sensuous style. Saturated in colour and light, these visions of nature are gloriously poetic yet subtly unnerving.

The Summer Palace by Lisa Cheung is a temporary celebratory installation originally commissioned for The Southport Flower Show. Inspired by walled gardens, hidden retreats and traditional tea gardens, Summer Palace functions as a vibrant sculpture and social space. At Greenland Street the piece will be re-configured in our garden and will create a welcoming autumn retreat.