Showtime. Equipped with a large format camera and mobile flash, the artist looked for stereotypical landscapes in the Californian surroundings, in which he could celebrate himself as a star of western imagery. 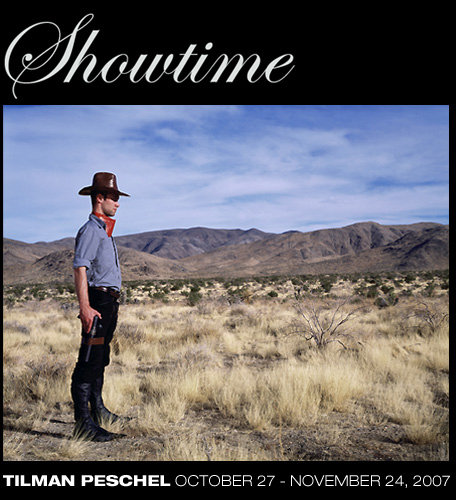 Hollywood is cool, sexy, glamourous, rich, arrogant, extroverted and in love with itself. Hollywood is a factory producing dreams, illusions and aspirations. The mass produced images from California never fail to generate seductive emotions and promises, in spite of their all too obvious fictional quality.

The artist Tilman Peschel, born 1976 in Freiburg im Breisgau, Germany, took his Villa Aurora artist in residence grant as an occasion to carry out an in-depth examination of Hollywood‘s trivial iconography. Equipped with a large format camera and mobile flash, he looked for stereotypical landscapes in the Californian surroundings, in which he could celebrate himself as a star of western imagery. In Missy Fountain, for example, he lounges around in a quatrefoil fountain disguised as a cheerleader. Milky Way shows the artist as a haunted faun, leaning against a pompous balustrade, enjoying a cocktail. Peschel‘s figures may evoke memories of actors from diverse film genres and the celebrity cult of the movie business. Peschel undermines Hollywood‘s trivial iconography by means of ironic self-exposure. But his artistic approach comprises a peculiar sort of contradiction: Whilst technique and image composition fulfill the highest criteria, Peschel stages his images with founded objects and cheap materials. However, one only discovers the provisionary nature
of the props at close inspection.

Showtime deals with the power of images. In an increasingly visually oriented world, the function of images as purely retinal aesthetics on one hand and images as role models on the other hand is becoming blurred. Today, images dictate how we design our environment, how we look and act. They influence our relation to authenticity, to collective and subjective identity. Peschel immerses himself in the mechanisms of this cultural industry, in order to achieve an analytic and humorous distance to its products by means of exaggeration and irony. In pieces like Glance of Glory, the artist furthermore refers to the role of art as an alternative, by now likewise popular archive of images.
Within the series, one work is particularly striking: Showtime depicts the surface of a big screen. The picture was taken shortly before the screening of a film. From the top and the edges of the photo, a red light bleads into the picture, turning bright and yellow towards the centre. Two white and purple spots highlight the lower third of the image, as if they were a symbol of the illusionary machinery of cinema.

Tilman Peschel studied by Prof. Jürgen Klauke at Kunsthochschule für Medien Köln (Academy of Media Arts, Cologne). His work has been shown in national and international exhibitions. An artist book was published by Darling Publications for the occasion of the exhibition. The book was edited within the Villa Aurora artist in residence grant, 2005.