Exposure. The exhibition presents four new, large-scale, black-and-white photographs, shown in conjunction with five earlier pieces (gelatin-silver prints as well as transparencies mounted in lightboxes) creating an ensemble that resonates both formally and thematically. Wall has summarized the formative influences on his work as the history of painting and cinema, and the theoretical arguments that developed around these discourses in the wake of 1968. 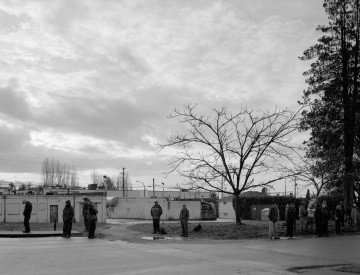 Jeff Wall: Exposure, a special exhibition commissioned by the Deutsche Guggenheim, presents, for the first time, four new, large-scale, black-and-white photographs by artist Jeff Wall. This remarkable body of new work is shown in conjunction with five earlier pieces—gelatin-silver prints as well as transparencies mounted in lightboxes—creating an ensemble that resonates both formally and thematically.

Wall has summarized the formative influences on his work as the history of painting and cinema, and the theoretical arguments that developed around these discourses in the wake of 1968. He first became known for pioneering the artistic presentation of large, color, photographic transparencies in lightboxes, which combined the scale of painting with the luminosity of the cinema screen. Wall’s engagement with the history of the photographic medium informed his subsequent characterization of his oeuvre according to two modes of production: documentary photographs that record found locations and subjects, and cinematographic photographs that are staged for the camera. In the mid-1990s, he began to create monumentally-scaled, black-and-white prints.

Of the four new photographs in Jeff Wall: Exposure, three take a cinematographic approach. Each composition realistically depicts people in familiar circumstances: a group of unemployed workers hoping to be selected for temporary jobs; a woman returning to her dreary apartment building, presumably after a hard day trying to make a living; and a group of boys playing a game with toy guns in an empty lot. The fourth work in this group of new photographs is a documentary image that does not include figures. This magnificent picture depicts a frigid cold storage facility, a desolate environment that quite literally threatens exposure for those who work there.

In this exhibition, Wall engages the twinned histories of documentary photography and neorealist film. Like the auteurs of these traditions, he takes an unvarnished look at the lives of the underprivileged, made all the more stark through the monochromatic gelatin-silver medium. He shoots his photographs on location, and he uses non-actors to achieve a sort of honesty devoid of dramatic affectation.

Photography is a uniquely realistic medium. In the fluidity with which he moves from color to black and white, from the documentary to the cinematographic mode, and from fantastic and imaginary subjects to realistic ones, Wall raises questions about the nature of photographic realism.

Nowadays, art is leaving its traditional protective housing and has begun permeating all spheres of social life. It serves increasingly less as the cultural heritage of a bourgeois elite and is instead conquering more and more social classes as a lifestyle element. There is no doubt that art has democratized itself, yet at the same time it is more out of reach than ever for many due to the astronomical prices. Contemporary art, in particular, offers glamour one can partake in, while in the art business the audience follows the bizarre spectacle of hardly comprehensible, record-breaking prices. Exhibitions have become events targeting a mass audience with an enormous marketing effort. But what role does the museum play today? What kind of spaces does art require? How can public and private interests be combined in a sensible way?

Deutsche Guggenheim, as a joint venture of Deutsche Bank and the Guggenheim Foundation, is looking forward to contributing its own experiences to the international debate on art spaces with this panel discussion.

ANNIVERSARY PROGRAM
Find all details on the program at http://www.deutsche-guggenheim.de