2012, Montezuma's Revenge. Whereas for the surrealists such dream work was an end in itself, for Shaw it serves as a fantastic reservoir of images that allow him to make what is at times a totally unique art. The sculpture shown at Praz-Delavallade's new space in Berlin is a kind of showcase that contains and collects miniature versions of all the dream objects Shaw has made until today. 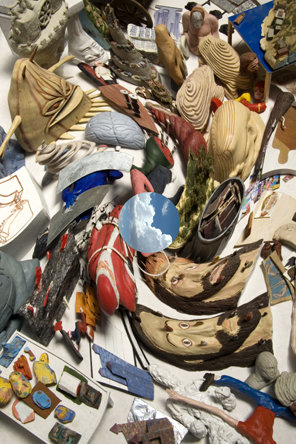 The gallery Praz-Delavallade is pleased to announce the inaugural opening of their new space in Berlin with the exhibition of the Los Angeles-based artist Jim Shaw.

“2012, Montezuma's Revenge” is a backdrop painting from the1930s, showing a slum on San Antonio’s outskirts. On this background, Jim Shaw painted a psychedelic vision of the end of the world.
“This vision was inspired by a combination of various ruminations on the impending end of the present Mayan time cycle, by a trip to Mexico which ended with a health crisis, caused by some amoebas, that is jokingly called ‘Montezuma's Revenge’ and various readings on the rediscovery of psychedelic mushrooms in Mexico that has led to a number of changes in the thinking of some western minds: a possible return of the repressed fungus of religious visions that may have led to our current state of advanced consciousness, as well as to contact with transdimensional intelligences, holes in reality, without forgetting vomiting and diarrhoea.“

Jim Shaw mixes events from his life, elements from one of his assistant's dreams (of a landscape with a stylized amoeba and studio assistants in hot air balloons) and any other kinds of experiences which are set on the border of reality, consciousness and our world as we know it. On this immense canvas of 11 m length, Jim Shaw superposes the vision of a miserable America and his own obsessions in which the divinities of the Mayas, the presidents of the US, nuns and extraterrestrial beings, emerging from 1950s comics, merge.

If the other backdrops from the series called "Left Behind", are musings on the Christian Apocalyptic world view and its attendant fantasies, this constitutes a vision of a totally new age apocalypse!
Another part of Jim Shaw’s work, probably the most famous and constant one, is the way he uses his dreams as in the well-known series of "Dream Drawings" and "Dream Objects". The artist began to inventory his dreams for several years; then, in 1992, he started a series of pencil drawings based on these dreams (approximately 500 drawings have been made until now). Shaw's dream drawings are accounts of actual nocturnal visions and serve as one of his primary visual sources and inspiration.

Whereas for the surrealists such dream work was an end in itself, for Shaw it serves as a fantastic reservoir of images that allow him to make what is at times a totally unique art. The diary works for Shaw as a source book from which he selects single motives to reproduce as dream objects that are materialized as oil paintings, photos, drawings - and sculptures in a significant range of different techniques and dimensions.

The sculpture shown in the exhibition at Praz-Delavallade’s new space in Berlin is a kind of showcase that contains and collects miniature versions of all the dream objects Jim Shaw has made until today. This sculpture is itself a dream object, perhaps one of the last.

Praz-Delavallade
Holzmarktstrasse 15/18, Bogen 48 D 10179 Berlin
Gallery hours are Tuesday - Saturday 11 am to 6 pm and by appointment.