Ode to Joy. Solo exhibition. Like a composer of colours, the artist marries music and pictures to create his own very personal symphonies. His masters are Van Gogh, Nicolas de Stael. Marcel Duchamp. 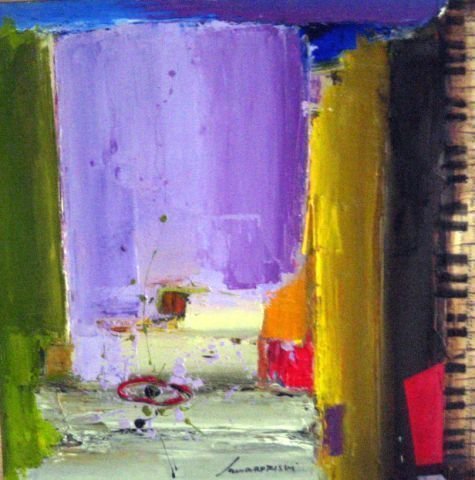 Ljupco Samardziski was born in 1947 in Skopje, Macedonia and graduated from the Academy of Music Art, University of art in Belgrade (Serbia) and in Ljubljana (Slovenia). For the past twenty years he has divided his time between living in Paris and Malta.

He started his artistic career as a soloist on double-bass (first concert 1965) and as a musician he performed in many countries as France, Netherlands, Austria, Germany, Poland, Italy, Spain, Switzerland, Belgium, USA, Canada, Brazil, Mexico, Morocco. He has performed both as a soloist, as well as a member with a number of national orchestras in several famous concert halls such as the Beethowen Hall in Vienna, the Music Centre in Utrecht , the Stedelijk Museum in Amsterdam, University of Sorbonne, the Carnegia Hall in New York among others. He has also recorded both his own compositions as well as those of world famous composers for Radio France, Radi Hilversum – Netherlands, RAI, TV5-France, Anthena 2 – France, TV Zurich and many tv/broadcasting programmes in USA, Canada and Mexico. He has also had a large number of compositions composed and dedicated to him by composers from all over the world.

As a painter Ljupco Samardziski has held exhibitions in a number of European galleries and his works can be found in numerous national and private collections in Europe and America including the Opera de la Bastille in Paris, the Sorbonne in Paris, Banque Credit Lyonnais - Paris, the Hyatt Group of Hotels and the Grimaldi family in Monaco, Henry Chabert – Lyon, Ives Saint Laurent, Eugen Ionesco, among others.

Jean Pierre Lehmans: “He marries music and pictures to create his own very personal symphonies. His masters are Van Gogh, Nicolas de Staël. Marcel Duchamp… he is a composer of colours and a painter of musical notes and an orchestra conductor of both who, at the same time knows how to make the chords of his instruments vibrate to touch the most profound chords in us.”

Ljupco Samardziski is also a member of several world art associations and universities: House of Arts – France, National Federation of Culture of the Republic of France, UNESCO – F.I.A.M…