Last show before K20 closes for just under a year and a half on 28th April 2008. A group exhibitions with paintings and installations by Joseph Beuys, Pablo Picasso, Gehard Richter, Ernst Ludwig Kirchner and many others. Idris Khan's subjects show his passionate interest in culturally coded works and artefacts from the spheres of literature, art and music. Photography and video are his media of choice. 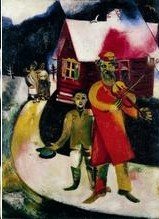 Before K20 closes for about a year and a half on 28th April 2008, the museum on Grabbeplatz will present its most important masterpieces in a comprehensive farewell show. Pablo Picasso’s monumental work “Deux femmes nues assises” (1920) from the artist’s classicist period is among these masterpieces. Georges Braque’s Cubist still life “Nature morte, harpe et violon” (1911) and Marc Chagall’s dynamic composition “Le violoniste” (1911) are further indisputable highlights of the exhibition.

Among other works, Max Ernst’s brilliant mural “Au premier mot limpide” (1923) and Joan Miró’s “Nu au miroir” (1919) will be chosen from the inventory of Surrealist art. The remarkable collection of coloured works by Paul Klee deserves particular mention. His work “Kamel in rhythmischer Baumlandschaft” (1920) and also his late work “heroische Rosen” (1938) are among the essential masterpieces.

Developments in western European art after 1945 will be represented primarily by artists such as Lucio Fontana and Piero Manzoni. Their pictorial objects will be shown together with Yves Klein’s monochrome works in blue, gold and red. The large installation “Palazzo Regale” (1985) and other works from the collection with works by Joseph Beuys will be on show. Works by Gerhard Richter, whose cycle “Silikat” (2003) was only recently acquired by Kunstsammlung, will continue to be on display.

Representative key works mark the selection of American art after 1945. Needless to say, this choice will include Jackson Pollock’s drip painting “Number 32” (1950) which represents a milestone in Expressionist painting. This monumental piece will be flanked by two outstanding examples from Pop Art and Minimal Art: the combine painting “Wager” (1957-59) by Robert Rauschenberg and Andy Warhol’s legendary work “Big Torn Campbell’s Soup Can (Black Bean)” (1962). Roy Lichtenstein’s “Big Painting No. 6” (1965) and Frank Stella’s subtle black painting “Delphine and Hippolyte” (1959) will also be shown again.
...........................

Since completing his studies at the Royal College of Art in London in 2004, the young British artist Idris Khan (born in 1978) has produced an intellectually lucid and visually impressive oeuvre in only a few years. Khan’s subjects show his passionate interest in culturally coded works and artefacts from the spheres of literature, art and music. Photography and video are his media of choice.

In his photographs he digitally superimposes pictures, texts or scores he has acquired onto one another. He has applied this method to postcards of Turner paintings, photographs of industrial buildings by Bernd and Hilla Becher, notations from Wagners Parsifal, pages of the Koran and from a treatise by Sigmund Freud. Idris Khan’s composites turn texts, pictures and music into a vibrating turbulence and give them a new dimension of presence.

In his videos on classic pieces of music by Bach and Schubert, musical performances are turned into visual and acoustic palimpsests through multiple repetition and layering. Khan fashions artistically autonomous artefacts from multilayered images of knowledge and creative production. These works go beyond the strategies applied in Appropriation Art. Khan consolidates the multitude of visual, linguistic or musical sources into enigmatic pictures. New iconic qualities develop from the overabundant concurring of data and information.

A catalogue published by Kerber-Verlag, Bielefeld, with a text by Pia Müller-Tamm and an interview with the artist by Christoph B. Schulz will appear in connection with the exhibition.