From Berlin to New York

An show of approximately 70 works, including painting, works on paper, and sculpture, as well as historical exhibition brochures and announcements from the collection of the German-born art dealer Karl Nierendorf. The display of selections from the Guggenheim Foundation Collection features works by Josef Albers, Adolph Gottlieb, George Grosz, Vasily Kandinsky, Ludwig Kirchner, Paul Klee, and Oskar Kokoschka, among others. 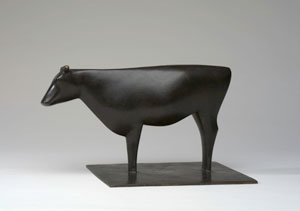 From Berlin to New York: Karl Nierendorf and the Guggenheim, an exhibition of approximately 70 works, including painting, works on paper, and sculpture, as well as historical exhibition brochures and announcements from the collection of the German-born art dealer Karl Nierendorf (1889–1947), will be on view at the Solomon R. Guggenheim Museum from January 26 through May 4, 2008. This exhibition of selections from the Guggenheim Foundation Collection features works by Josef Albers, Adolph Gottlieb, George Grosz, Vasily Kandinsky, Ludwig Kirchner, Paul Klee, and Oskar Kokoschka, among others.

Formerly a banker, Karl Nierendorf began his career in the art trade in 1920 in Cologne, specializing in works on paper by German and Austrian Expressionist artists. In 1936 Nierendorf immigrated to the U.S.A. and established the Nierendorf Gallery in New York, where he encountered Hilla Rebay (1890–1967) and the newly established Solomon R. Guggenheim Foundation. Nierendorf promoted artists represented in the Guggenheim collection, including Lyonel Feininger, Perle Fine, and Franz Marc, which led the Foundation to purchase a number of important works for its collection from Nierendorf Gallery. Following his death in 1947, the Guggenheim Foundation purchased the entire estate of Karl Nierendorf, thereby gaining not only works acquired for the Guggenheim during his travels abroad from 1946 to 1947, but also his gallery inventory and likely objects from the dealer’s personal collection. This major acquisition enriched the breadth of the Solomon R. Guggenheim Founding Collection with a concentration of Expressionist works, such as Kokoschka’s Knight Errant (1915); Surrealist paintings; and significant holdings of Klee. Comprised in this major purchase are also early paintings by Adolph Gottlieb, which are among the first compositions by a member of the nascent school of Abstract Expressionism to enter the Guggenheim’s collection.

This permanent collection installation features both acquisitions from Karl Nierendorf’s galleries in Berlin and New York and from the dealer’s estate. In addition to historical exhibition brochures and gallery announcements, the exhibition will feature an interactive touch screen where the visitor can view archival catalogues, page by page.

About the Solomon R. Guggenheim Foundation
Founded in 1937, the Solomon R. Guggenheim Foundation is dedicated to promoting the understanding and appreciation of art, architecture, and other manifestations of visual culture, primarily of the modern and contemporary periods, and to the collection, conservation, and study of the art of our time. The Foundation realizes this mission through exceptional exhibitions, education programs, research initiatives, and publications, and strives to engage and educate an increasingly diverse international audience through its unique network of museums and cultural partnerships. Currently the Solomon R. Guggenheim Foundation owns and operates three museums: the Guggenheim Museum on Fifth Avenue, New York City; the Peggy Guggenheim Collection on the Grand Canal in Venice, Italy; and the Guggenheim Hermitage Museum in Las Vegas. The Foundation also provides programming and management for two other museums in Europe that bear its name, the Guggenheim Museum Bilbao, and the Deutsche Guggenheim, in Berlin. The Guggenheim has extended its reach not only through its network of international locations and alliances, including with the State Hermitage Museum in St. Petersburg and the Kunsthistorisches Museum in Vienna, but also through its expanding permanent collection and increasingly diverse schedule of special exhibitions and programs. Since 1992, the Guggenheim has produced more than 250 major exhibitions.

These projects have encompassed definitive retrospectives of major American and international artists, including Matthew Barney, Georg Baselitz, Francesco Clemente, Dan Flavin, Jenny Holzer, Ellsworth Kelly, Roy Lichtenstein, Mario Merz, Robert Morris, Claes Oldenburg, Nam June Paik, Robert Rauschenberg, James Rosenquist, Daniel Buren, David Smith, Richard Prince, and Cai Guo Qiang; historical surveys of 20th-century art such as The Great Utopia: The Russian and Soviet Avant-Garde, 1915–1932 (1992), Picasso and the Age of Iron (1993), The Italian Metamorphosis, 1943–1968 (1994), and Abstraction in the Twentieth Century: Total Risk, Freedom, Discipline (1996), and Kazimir Malevich: Suprematism (2003); and exhibitions that have presented the artistic heritage of many countries and regions: Africa: The Art of a Continent (1996), China: 5,000 Years (1998), Brazil: Body & Soul (2001), The Aztec Empire (2004), RUSSIA! (2005), and Spanish Painting from El Greco to Picasso: Time, Truth, and History (2006). During the past five years, Guggenheim-organized exhibitions have been presented in more than 80 museums around the world. As a result of these expanded sites and programs, the Guggenheim has more than tripled its attendance worldwide. With nearly three million annual visitors worldwide, the Guggenheim and its network of museum is one of the most visited cultural institutions in the world.

Guggenheim Museum
1071 Fifth Avenue - New York
Admission and Museum Hours
Admission is dollars18 for adults, 15 for students and seniors (65+), and children under 12 are free. The museum is open Saturday to Wednesday, 10 AM to 5:45 PM, Friday 10 AM to 7:45 PM. The museum is closed on Thursday. On Friday evenings beginning at 5:45 PM, the museums hosts Pay What You Wish.