Cultural exchange and influences within North Eastern Europe. "The aim of the exhibition is to show the development of that which constitutes the contemporary within our global immediate surroundings. Artist selection has been based on insight into how society, culture and ideology appear today, within the area and within particular nations. Artists who offer a perspective approach on development, and from the respective countries. Many of them work using elements of the historical, primarily the history of the 1900's, in their work." 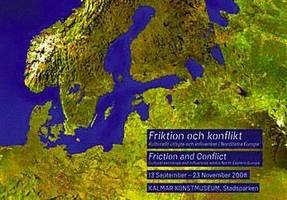 
The new Kalmar Museum of Art (inaugurated this year) is built on ground, which has repeatedly, throughout history, served as a battlefield in the struggle for power and the right to interpretation of culture, between disparate nations. These battles have, at times, influenced the course of history. Many of the great European culture-spheres, for example, the German, Russian and Nordic spheres converge within the immediate surrounding of Kalmar. These boundaries have, during the course of time, shifted, altered, essentially influencing each other. World War II saw the eradication of entire cultures and communities. During the latter part of the twentieth century, Europe became divided; the culture-spheres of North Eastern Europe kept themselves at a comfortable distance. In Sweden, culture interests gravitated away from the German influence and ever increasingly towards the Anglo-Saxon and American cultures. Politically one looked towards 'The Third World'. The fall of the Berlin Wall together with the mechanisms of globalization, have seen the North Eastern European geographical culture-sphere converge in new ways. This has not only created new prospects and potential, but has also breathed life into existing tensions.

One can draw attention to a list of examples of conflict within our global vicinity, a list, which the Europe of the future needs to resolve and/or learn to live with. To mention a few: new minority groups, lacking obvious abode, have arisen since the fall of the Berlin Wall. This was brought to the foreground in 2007, when authorities in Estonia decided to relocate a memorial monument for fallen Soviet soldiers from World War II. Similar opposition has been witnessed in Latvia and Lithuania. Conflict arises, between differing ethnical groups, in the wake of the self-definition process of new nations. Swedish distrust of Russia has recently become public again, which can be seen in the negative reaction of Sweden towards the positioning of a pipeline, between Russia and Germany, in the Baltic Sea. Whilst at the same time, it was eventually revealed, that the recent and much discussed government act passed, concerning the approval of the FRA (Swedish National Defence Radio Establishment) to monitor all Internet traffic, was really about the approval of the surveillance of Russia. The Catholic Church's position in Poland is still strong, rendering it a political power, a conception, which is hardly completely compatible with secular Sweden. Germany continues to process its complex history, in establishing an own identity after the union of 1990. In Finland, great historical rhetoric still exits around the two Winter Wars. In Denmark, issues as to what constitutes the essentially Danish, has been a political question for many years. And 'Europe's Last Dictatorship', White Russia has more recently experienced a bombing incident. The list of potential breeding-grounds for conflict, however long it may be, comprise issues that affect society today and which may in due time, affect the course of history, both positively and negatively. The escalating current dispute between Russia and other countries in Europe, due to the conflict between Georgia and Russia, is an example of the urgent need to get better understanding of the complexity in the European history.

Concurrent with the above mentioned examples of conflict, changing norms in mobility, through the advent of low-cost airline companies, are breaking new ground, altering currents: social interfaces appear between differing nations and culture-spheres. Nowadays one can fly direct from Småland to Berlin, Düsseldorf and Kaunas. During the last few years, Germany has become an important site for the Nordic practitioners of culture, especially Berlin, which has received great Nordic enclaves. Russian tourists are of ever increasing import for Sweden, whilst in Småland more and more houses are being bought by the Danes, North Germans and the Dutch.

Friction and Conflict is no history exhibition; the aim is rather to show the development of that which constitutes the contemporary within our global immediate surroundings. Artist selection has been based on insight into how society, culture and ideology appear today, within the area and within particular nations. Artists who offer a perspective approach on development, and from the respective countries. Many of them work using elements of the historical, primarily the history of the 1900's, in their work. The artists, to a large extent hail, geographically, from areas, which have at some time during history belonged to Sweden or at some point belonged to our neighbouring countries, more often than not, regarded as enemies. The selected artists come from areas in and around the Baltic Sea and from Germany in the west to Russia in the east, including White Russia and the Ukraine.

Most of the exhibiting artists have never, or to a limited extent, shown in Sweden before.

The new Kalmar Art Museum Konstmuseum opened in May; it's drawn by Tham & Videgård Hansson architects. The opening exhibitions with Swetlana Heger, Guy Ben-Ner, Daniel Segerberg and the exhibition RETRO with Swedish Modernism, was seen by over 26 000 visitors.