Between Tibet and Assam

Cultural diversity in the eastern Himalayas. A collaborative research project undertaken by the School of Oriental and African Studies (SOAS) and the British Museum. Photographs from the archives of the outstanding anthropologists Christoph von Furer-Haimendorf (1940s) and Verrier Elwin (1960s) are shown alongside contemporary images from the project's photographer, Michael Aram Tarr. 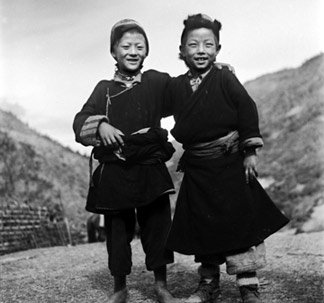 The mountainous region of Arunachal Pradesh in India is located in the eastern Himalayas between Assam, Bhutan, Burma and the Tibet Autonomous Region of the People's Republic of China. Until recently it was little known or studied and access to the region was restricted. However, a collaborative research project undertaken by the School of Oriental and African Studies (SOAS) and the British Museum, and funded by the Economic and Social Research Council, has been shedding new light on this area of great cultural diversity.

The exhibition, which forms part of the research project, illustrates the cultural diversity of the region. Arunachal Pradesh has a population of around 1 million, drawn from 35 tribal groups speaking 25 languages and practicing a variety of belief systems. Two tribal groups from different parts of the state form the focus of the exhibition: the Monpa from the northwest who practice Tibetan Buddhism and the Apatani from the centre who are animists. The exhibition will feature a mixture of fascinating historical objects from the British Museum’s collection – most never before displayed - contextualized by contemporary objects acquired during the project. Ritual textiles, such as handwoven woollen shawls, jackets and headdresses worn by shamans will be displayed as well as wooden masks used in Buddhist monastic dance. The cultural variety of the state is evident from a display of four types of visually unusual headgear– two made of felt and two of woven cane – textiles and woven cane/ bamboo feature particularly in the exhibition. These objects illustrate the fact that these cultures have been influenced for many centuries by both the Assam plains to the south and the Tibetan plateau to the north.

Photography is a key feature of this exhibition in a way that is unusual in the British Museum. Photographs from the archives of the outstanding anthropologists Christoph von Fürer-Haimendorf (1940s) and Verrier Elwin (1960s) are shown alongside contemporary images from the project’s photographer, Michael Aram Tarr. In the Apatani section, there is a sequence of objects relating to the sacrificial ritual of Murung, with both contemporary and older items as well as rare archival and exceptional new photographs. In the Monpa section items acquired more than a century ago but without information are contextualised as a result of the project research. Also in this section the transition from block-printed to computer-generated Buddhist ritual texts is illustrated. Change and continuity are clearly evident in Arunachal Pradesh. This exhibition provides a rare opportunity to engage with this remote and mountainous region of Asia.