The group exhibition, winding itself through rooms of varying colours and brightnesses, dedicates and positions itself between several parameters. Involving sexual horizons and the contemporary (un)conscious, it immerse itself in a Sphinxed atmosphere, where camp objects and unsettling material visions are gradually discovered by the viewer. 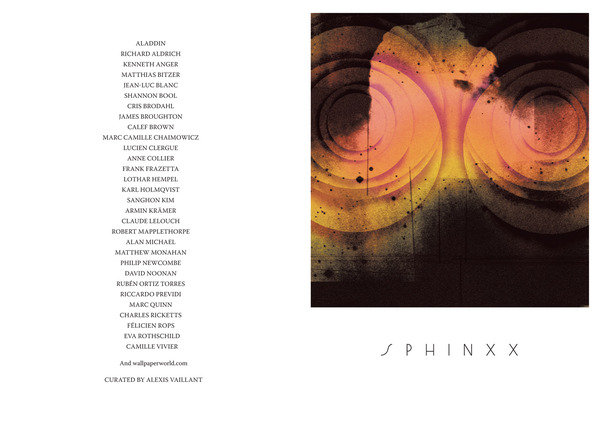 Stuart Shave / Modern Art is thrilled to present 'Sphinxx' - a group exhibition conceived and curated by Alexis Vaillant. The Sphinx, to whom ancient Greeks applied the name the "strangler", has been depicted throughout the ages as a reclining figure with a head of a lion. Guarding the threshold to the city of Thebes, travellers failing to answer her mystic riddles were immediately devoured, never to pass through the city's gates. A sum of contradictory forces, the Sphinx remains a fascinating figure whose curiosity both attracts and paralyses thought.

In 'Sphinxx', Vaillant proposes the motif of this mythological character not only as an illustrative theme but also as an "eye of insight" into our current cultural era. The exhibition, winding itself through rooms of varying colours and brightnesses, dedicates and positions itself between several parameters. Involving sexual horizons and the contemporary (un)conscious, it immerse itself in a Sphinxed atmosphere, where camp objects and unsettling material visions are gradually discovered by the viewer. The idea of the threshold is heightened in this exhibition. Gilded portals in the gallery spaces transfer the visitor from one very different room to another, hinting at the original gates through which wanderers attempted to pass. These passing points may be seen as decoding stages or voids. Karl Holmqvist's 'Napoleon visits Sphinx at Giza' is set against a woozy backdrop of share value graphs as refracted through a crystal ball. Viewers passing Riccardo Previdi's 'Audrey' gain a glimpse in a slatted wooden box of an image of the film star Audrey Hepburn held by dancer Fred Astaire. On the regular bookshelves of the gallery office are secreted re-printed editions of Oscar Wilde's 1894 novel 'Sphinx' with original Art Nouveau cover by Charles Ricketts.

Other pieces hypnotise, such as Philip Newcombe's sugar lollipop installed at genital height or Marc Quinn’s seminal sculpture 'Sphinx' in which a yogic Kate Moss returns our stare. In Claude Lelouch's 9 minute film 'C'était un rendez-vous' (1976), an accelerating Ferrari tears through a pre-dawn Paris to the summit of Montmartre. Shannon Bools's 'Perpendicular Expression of a Horizontal Desire' hangs from the ceiling: a subtle pole dancing reference. There are works which present more literal treatments such as Lucien Clergue's photographic portrait of Cocteau and Sphinx (1959) and Belgian painter Fernand Khnopff's symbolist depiction from 1920. An immersive environment absorbs the visitor into a space without daylight, allowing them to explore a collage of objects where book covers, artworks and movies work together towards the idea of a contemporary place of reverence. This neatly echoes the Sphinx's path through history, from temple guard via military insignia, to Glam Rock aesthetics. The exhibition sidesteps an immediate translation of the title, instead allowing a more pervasive reading of the Sphinx as subject.