The Times of a Place

The conjugation of a landscape 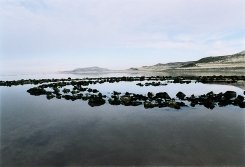 The project “The Times of a Place” brings together work by a number of artists exploring questions of time, various temporalities that share the common denominator of being developed in the natural environment.

“The Times of a Place” can be understood as the conjugation of a landscape. It enables the transition of the term “landscape” from its nominal condition to a verbal condition; it allows it to shift from a noun to a verb, as W.J.T. Mitchell advocated.

The pieces comprising this exhibition take their references from “landscapes” which are ultimately developed and shown as “places”, with “place” understood as a much broader and more ambivalent concept. In turn, place becomes a much more dense, rounded and complex term given that it incorporates the factor of time. Places become time capsules where events accumulate, layered like strata, and where the gaze activates the possible pasts of these places. The place dynamises the possible political meanings of a specific landscape, through the time its condenses.

At the same time, another of the elements shared by the works in this project is the fact that they are all based on temporal media, made on video or film. In the 1960s and 70s, the natural environment was recovered as a cinematographic motif by artists who were exploring new syntaxes and possibilities for the medium, and indeed it is again being recovered by contemporary artists. For all of them, the natural surroundings and the exploration of places enable an investigation into the non-narrative potential of the moving image and in turn to further explore and underscore the temporal parameter of this image. Film is capable of dynamising the landscape: it goes from being a static representation, as painting and photography had historically conceived it, to showing the natural environment in motion, thus achieving a closer approximation to the subjective and individual perception of the landscape.

The exhibition is accompanied by a publication featuring texts by the curator, Laura Mulvey, Jean-Christophe Royoux, and the participating artists.

Robert Smithson, The Spiral Jetty, 1970.
32 min., film 16mm
The Spiral Jetty is a work of art cutting across three formats: an intervention in the area of Great Salt Lake (Utah, USA) in 1970; a film from the same year, which is on view in the exhibition; and a text published in 1972, which is also included in the publication accompanying the project.
The film, should not be viewed as a film documenting the piece but another work created a posteriori, and while it does share structural aspects with the earthwork, its raison d’être lies in constituting itself as an other-place. Film interested Smithson as another possible place, as a parallel place. In the description of the process of realization of the film made in the text, Smithson makes clear his desire not to explain or narratively document the construction of the work but to render the material that constructs the film as a receptacle, as a container of time, of past materials.

Stan Brakhage. Creation. 1979
16 min., filme 16mm.
Stan Brakhage made around 400 films throughout his career and was one of the seminal filmmakers in experimental and structural film.
Brakhage’s films are intimately associated with the tradition of the American Romantics (Ralph Waldo Emerson, Henry David Thoreau, etc.) for whom there was a parallelism between representation and the consciousness; in this respect, film is considered as an active agent in the creation of metaphors of the act of looking, or the experience of perceiving.
Creation is a powerful visual exercise where the landscape of glaciers in Alaska took on the lead role in a mise en scène that transmits a vertiginous rhythm on the film. The fact that it has no sound lends extra concentration to the visual aspect. The views of pieces of ice slowly give way to views of fragments of earth, trees, birds, and even a woman appears on screen.

Chris Welsby. Seven Days. 1974
20 min., filme 16mm.
Welsby’s work combines the observation of a place with the precision permitted by technology. His work maintains a balance between technology and nature where the time parameter can be condensed while also expanded, and where the mechanic and the natural create rhythms.
Seven Days (1974) is an excellent example of this desire to render this balance between the mechanical and the natural; with the predominance of the representation of an interval of time that is expressed through its condensation and the changes that take place.
The film was made in Wales over a period of seven days. Each day was shot consecutively and appears in that order in the final film; each day starts with sunrise and finishes with dusk. One frame was taken every ten seconds throughout the hours of sunlight.

James Benning. Casting a Glance. 2007
78 min., filme 16min.
Benning is a constant witness of the places he visits and revisits. This artist’s films, always on 16mm, are portraits of a place over the duration of time. Various places in the US geography have been featured in his film over decades. The films consist of fixed shots of differing duration and from different points of view of the places which are the object of the recording.
One of the places that Benning has visited once and again over the years is the site of Robert Smithson’s Spiral Jetty, and it appears in several of his films, including North on Evers and Deseret. In 2007 it finally became the centrepiece of Casting a Glance. This film was made over a two-year period spanning 2005-2007, during which Benning visited Smithson’s work sixteen times.

Tacita Dean. Banewl. 1999
63 min., filme 16mm.
In Banewl (1999) Dean’s initial intention was to record a total eclipse of the sun, an natural yet extraordinary event, in real time. The original idea was to make a film lasting 2 hours 44 minutes which was the complete duration of the eclipse, and for this purpose she used four cameras in order not to miss any opportunity. Nonetheless, the weather was not on her side: the sky was cloudy and while the eclipse was noticeable and partially visible, it was not what was expected.
Banewl is the phonetic transcription of the local pronunciation of Burnewhall, the farm where she shot the film which eventually lasted 63 min. In a series of frames she shows the changes of light taking place before, during and after the eclipse. The film revolves around the central, dramatic event of the eclipse, which did not unfold as hoped for, instead producing a feeling of anti-climax.

Patricia Dauder. Les Maliens (a film)
2005, filme 16mm
In Les Maliens (a film), Patricia Dauder engages with and films an unknown remote landscape or one known only through the media and literary references. Unlike the work of Benning—who returns and films a place over and over again—Dauder and her camera witness a place for the very first time, and radically differently from its usual context.
On the journey the film revolves around, Dauder forefronts the vision of the foreigner, the eye-witness of a remote reality; in this sense it is symptomatic that the shot with which the film begins was recorded from behind a window, making the window frame coincide with the film frame, maintaining a certain distance.

Darren Almond. A. 2002
22 min., vídeo
Almond created A (2002) during a residency as ship artist with Mission Antarctica and the resulting film is divided into three episodes that are clearly distinguished by their respective visual and sound treatment. Nonetheless, they share the absolute and total presence of the landscape, divested of all anecdote and without any possible distraction. The first records the voyage to the place, the second depicts the landscape of the place and the aggressiveness of the ice, while the third reflects the possible hallucinogenic state this surrounding environment can provoke after complete immersion in totally different spatial and temporal parameters. The sound accompanying each chapter is singular and distinctive. It is created using sounds of ice movements and the fragmentation of the icecaps, etc. recorded in situ.

Beryl Korot. Dachau. 1974
24 min., instalación de vídeo
Made on video, a new technology at the time, this work explores a place: the architecture of the first concentration camp in Nazi Germany.
All the images comprising the installation come from the recording Korot made in the place in 1974. She mainly took fixed frame shots from very specific positions: the outside, various interiors, making no effort to avoid the tourists that were there, yet focusing on the architecture. A total of four and a half hours of film was reduced after a meticulous and peculiar—for the time—process of editing to a 24 minutes installation comprising four synchronised screens.
The editing eschews a lineal presentation, a “documentation” of the place and calls on the beholder to make a more complex and abstract reading of it. The end work effectively revolves around repetition as a strategy to activate the memory, sidestepping at all times any emotional bond.

Melik Ohanian. Invisible Film. 2005
90 min.,
In Invisible Film the artist re-locates a past time and place in order to effectively reactivate them in the present. Ohanian recovers Punishment Park, a film made by Peter Watkins in 1971 and re-contextualises it in the present. Punishment Park was shot in the San Bernardino desert, at around 100km from Los Angeles, at the height of the Vietnam war and is partly a protest against the alleged activation by Nixon’s government of the McCarran Act from 1950, as a reaction to the growing protest movement against the war. This law authorised federal authorities to detain and charge suspects of being “a risk to internal security” without previous permission from Congress. Punishment Park was effectively banned for 25 years.