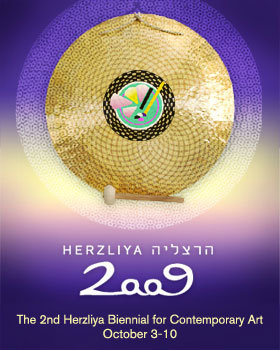 Herzliya 2009: an urban, nocturnal and festive group show, to be held for one week in Herzliya's city center.

The show will feature a large and diverse array of works, findings, inventions and sounds from new Israeli art: sculptures, collages, music, fashion, television, floristry, architecture, interior design, astronomy, dance, theatre, martial arts, handicraft, cinema and robotics – most of which will have their world premiere at the biennial. These will be shown next to a refreshing selection of works drawn from the history of Israeli art.

Herzliya 2009 is curated and designed by Adi Englman, Meir Kordevani and Toony Navok, the editors and the publishers of Picnic Magazine, an Israeli-based international publication for visual creation distributed in selected stores worldwide.

This year's biennial is the second to be held in Herzliya. Opening events, on October 3rd, will include live music shows and performances, the unveiling of the new biennial pavilion, the launching of Picnic's fourth issue (the catalogue of the biennial), as well as fireworks, treats and desserts.

The opening event will be held in the presence of Mrs. Yael German, mayor of Herzliya and initiator of the biennial, as well as participating artists.

Herzliya 2009 at the museum: special biennial exhibition at the Herzliya Museum of Contemporary Art, curated by Picnic Magazine