Since the late 1970s, Kapoor has extended the scope and language of contemporary sculpture through his explorations of scale, color, and the concept of the void. Constructed of Cor-Ten steel, a new material for the artist, Memory is a milestone for Kapoor. The work is composed of 154 Cor-Ten steel tiles. Its form nearly fills the gallery it occupies, challenging and altering the museum's architecture through its improbable scale and proportions. The title 'Memory' alludes to how visitors encounter the work, which can never be seen in its entirety and remains largely hidden from view. 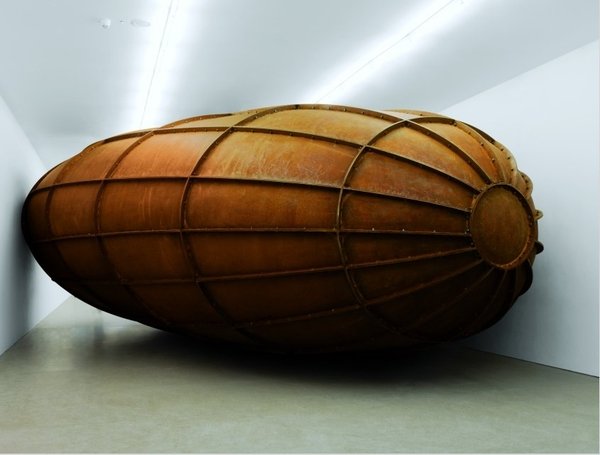 Memory (2008), a major new site-specific sculpture installation by leading international artist Anish Kapoor, will be on view at the Solomon R. Guggenheim Museum from October 21, 2009, to March 28, 2010 as part of the Deutsche curated by Sandhini Poddar

Since the late 1970s, Kapoor has extended the scope and language of contemporary sculpture through his explorations of scale, color, and the concept of the void. Constructed of Cor-Ten steel—a new material for the artist—Memory is a milestone for Kapoor. The work is composed of 154 Cor-Ten steel tiles, measures 14.5 x 8.97 x 4.48 meters overall, and weighs 24 tons. Its form nearly fills the gallery it occupies, challenging and altering the museum’s architecture through its improbable scale and proportions. The title, “Memory,” alludes to how visitors encounter the work, which can never be seen in its entirety and remains largely hidden from view.

This exhibition is made possible by Deutsche Bank. Additional support is provided by the International Director’s Council of the Solomon R. Guggenheim Museum.

The Leadership Committee for Anish Kapoor: Memory is gratefully acknowledged. Anish Kapoor: Memory was initiated in 2006 by Alexandra Munroe, Senior Curator of Asian Art, Solomon R. Guggenheim Museum, and is curated by Sandhini Poddar, Assistant Curator of Asian Art. In early 2007, Kapoor was invited to create a site-specific work capable of engaging two very different exhibition locations: the Deutsche Guggenheim, where the work debuted in November 2008, and the Guggenheim Museum. “The Guggenheim Museum is delighted to present Anish Kapoor’s Memory in New York in our Deutsche Bank series of commissioned works by leading contemporary artists,” remarked Richard Armstrong, Director of the Solomon R. Guggenheim Foundation and Museum. “This show is presented as part of the museum’s 50th Anniversary program, and underscores our commitment to the importance of working with living artists,” continued Armstrong.

Kapoor’s earlier large-scale site-specific installations, such as Taratantara (1999), Marsyas (2002), and Svayambh (2007), succeeded in creating new perceptions of space through their distortions of scale. Continuing these types of distortions, Memory’s enormous scale prevents viewers from perceiving a gestalt. The work divides the gallery space into several distinct viewing areas, which can be approached either from the museum ramps, elevator banks, or the adjacent gallery. Visitors to the Guggenheim Museum are compelled to navigate different sections of the building as each vantage point offers only a glimpse of either the sculpture’s exterior form or its interior shell. This processional method of viewing the sculpture is an intrinsic aspect of the work. Kapoor asks visitors to connect and construct the fragmented images of Memory retained in their minds and thus exert more effort in their acts of seeing. Kapoor calls this process creating a “mental sculpture.”

As a 24-ton volume of Cor-Ten steel, Memory is vast, ineffable, raw, and industrial. Compressed into one of the Guggenheim Museum’s annex galleries, the sculpture’s sheer volume is foreboding, as its peripheries glance against the gallery walls and ceiling with the utmost precision. From within, Memory’s seamless eight-millimeter-thick steel tiles, meticulously manufactured to ensure absolute darkness inside, read as one continuous form. Viewable only through a two-square-meter aperture, these seamless tiles create the boundless void of Memory’s cavernous interior. Kapoor has created a sculpture whose interior space seems much more vast than that defined by its exterior form. A staircase leading from the adjacent gallery offers a view through the aperture. The precise wedging of this hole into the gallery wall defines a flat, two-dimensional plane that, from a certain distance, appears as a painting rather than an opening. Kapoor’s interest in this pictorial effect is best reflected in his frequently quoted statement, “I am a painter working as a sculptor.” This new commission was engineered by Aerotrope Limited and manufactured by Centraalstaal B.V. in Groningen, Netherlands.

Exhibition Catalogue
The accompanying exhibition catalogue offers in-depth analyses of Kapoor’s creative intellectual process and documents Memory’s development from the initial models to its final form at the Deustche Guggenheim and the Guggenheim Museum. The richly illustrated publication features a comprehensive exhibition history and bibliography, and provides a broad critical framework with multidisciplinary essays by Henri Lustiger- Thaler, Professor of Cultural Sociology, Ramapo College; Poddar; Gayatri Chakravorty Spivak, university professor and Director of the Center for Comparative Literature and Society, Columbia University; Steven Holl, Principal of Steven Holl Architects, with David van der Leer, Assistant Curator of Architecture and Design, Solomon R. Guggenheim Museum; and Christopher Hornzee-Jones, Director, Aerotrope Limited. Priced at $45 (hardcover), the exhibition catalogue Anish Kapoor: Memory can be purchased at the Guggenheim Store or at the Online Store at guggenheimstore.org. About The Deutsche Bank Series at the Guggenheim and the Deutsche Guggenheim

In 1997, the Guggenheim Foundation and Deutsche Bank opened the Deutsche Guggenheim and launched a unique and ambitious program of contemporary art commissions. This collaboration has enabled the Guggenheim Foundation to act as a catalyst for artistic production. The Deutsche Guggenheim was conceived as a partnership and consists of three main objectives: the presentation of thematic exhibitions that recognize artists who have contributed significantly to the development of art; the presentation of works from the Deutsche Bank Collection; and the commissioning of site-specific works by both young and established artists. The artists who have created new works as part of this program since its inception are: John Baldessari, Hanne Darboven, Anish Kapoor, William Kentridge, Jeff Koons, Gerhard Richter, James Rosenquist, Andreas Slominski, Hiroshi Sugimoto, Bill Viola, Phoebe Washburn, Lawrence Weiner, Jeff Wall, and Rachel Whiteread.

About the Asian Art Initiative
In 2006, the Guggenheim Museum became the first international modern and contemporary art museum in the West to establish a curatorial position for Asian art. This commissioned project by Kapoor represents the third exhibition in New York to be realized under the curatorial direction of the Asian art initiative, following closely on the heels of Cai Guo- Qiang: I Want to Believe and The Third Mind: American Artists Contemplate Asia, 1860– 1989. The Asian art initiative is supported by the Guggenheim Museum’s Asian Art Advisory Board, which was established in 2007. Central to the Guggenheim Museum’s Asian art activities is the formation of the Asian Art Council, a group of museum directors, scholars, curators, and artists who serve as a curatorial think tank mapping the intellectual course of modern and contemporary Asian art and debating key issues pertinent to its curatorial practice.