The sky within my house 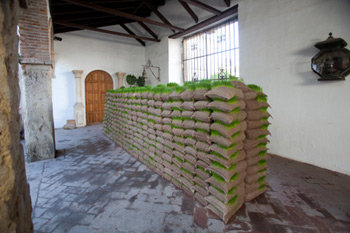 This exhibition The sky within my house. Contemporary Art in 16 Cordoba patios presents works by 16 contemporary artists from several countries in 16 private and monumental patios in Cordoba, Spain. Patios constitute a most emblematic heritage of the city, providing a synthesis of Cordoba's long multicultural history. Historically traceable to Mesopotamia and later to the atrium of ancient Rome, the patio was developed by Arabic and Mudejar architecture. This architectural element reached its height in Andalucia.

Cordoban patios are unique, with the explosion of color and beauty provided by its baroque proliferation of flowers. Aesthetic environments for communal life, they embrace pieces of nature and of open urban space within the home, becoming a sort of family's Gardens of Eden in the Arab tradition. Moreover, they are places to see and feel the sky: a way to appropriate a bit of the cosmos for private use.

The artworks shown are mainly site-specific interventions inspired by each patio, or they correspond to existing projects that have been adapted to the patio's setting. The objective is to reach a balance, or rather a mutually enriching conversation between patios and contemporary art. Thus, the patios are not mere spaces to show artworks, but active components in a relationship. The artistic interventions are bigger or smaller, depending on each case, but they carry out a meaningful dialogue. The works test and explore the relations between public and private milieus, between art and daily life, and among contemporary culture, history and tradition.

The Sky Within my House includes two exhibitions in one: visitors are able to enjoy both the art as the patios, several of which are opening especially for the occasion. Each one of the 16 patios constitutes a particular encounter between patio and artwork, a sort of micro-exhibition that has its own content and imagery and is addressed to a general audience. The exhibition's "theme" is the patios as aesthetic, cultural, historical and semantic milieus.

Cordoba in Mode 16: The future has roots
To mark the preparation for the city of Cordoba's candidature as European Capital of Culture, the Cordoba City of Culture Foundation, the organization responsible for designing that project, has promoted 16 different kinds of cultural activities to be organized throughout 2009 by the four public institutions in Cordoba that form the foundation: the Town Hall, the Provincial Government of Cordoba, the Andalusian Regional Government and the University of Cordoba. With this programme, grouped together under the title Cordoba in Mode 16: The future has roots, the aim is to put Cordoban culture firmly on the Spanish and international map.