Works in the exhibition are drawn from some Frac Collections. The show brings together a multi-generational array of artists whose work contends with idealism, utopian thinking and, in counterpoint, the cynicism that follows failed revolution and the retreat of optimism in the face of pragmatic reality. While Yona Friedman's "utopia realisable" informed the framework of the show, the selection of artwork reflects the cycling and recycling of optimism and cynicism in postwar culture. 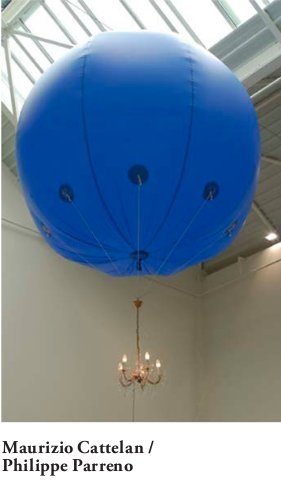 First Exhibition of the Frac Collections in the United States; Will Travel to Hyde Park Art Center, Museum of Contemporary Art Detroit

Inova, the Institute of Visual Arts in the Peck School of the Arts at the University of Wisconsin- Milwaukee, is pleased to announce that Spatial City: An Architecture of Idealism, a major touring exhibition of contemporary art drawn from the French Regional Contemporary Art Funds (Frac), will open on Friday, February 5, 2010 with a reception from 5-8 pm and will remain on view through April 18, 2010. Spatial City brings together an international, multi-generational array of artists--with an emphasis on artists living in France--whose work contends with idealism, utopian thinking and, in counterpoint, the cynicism that follows failed revolution and the retreat of optimism in the face of pragmatic reality.

This is the first exhibition of the Frac collections in the United States, and it will tour the Midwest throughout 2010. Curator Nicholas Frank (Inova) originated the concept and exhibition.
Participating curators are Allison Peters Quinn (Hyde Park Art Center), Luis Croquer (Museum of Contemporary Art Detroit - MOCAD), Eva González-Sancho (Frac Bourgogne) and Yannick Miloux (Frac Limousin). The project and tour were developed in partnership with Platform (Regroupement des Fonds régionaux d'art contemporain--the association of the Frac) and the Cultural Services of the French Embassy in the United States. Marie-Cécile Burnichon of Platform coordinated the project and tour.

Kristina Solomoukha, whose piece, Shedding Identity, 2005-2006 (Collection Frac des Pays de la Loire), is in the exhibition, will be in residence in the Peck School of the Arts and the School of Architecture and Urban Planning the week of February 1 and will be present at the opening. She will offer two free public lectures while in residence (see Related Programming, below).

In a seamless celebration of French culture, the Festival of Films in French will offer its opening night screening, Jean Becker’s Dialogue avec mon jardinier, at 8 pm in the UWM Union Theatre (see Related Programming, below).

Following its opening at Inova, Spatial City will travel to two other architecturally-rich Midwestern cities: Chicago, where it will be at the Hyde Park Art Center from May 23 through August 8, 2010; and Detroit, where it will take up residence at the Museum of Contemporary Art (MOCAD) from September 10 through December 26, 2010.

Spatial City: An Architecture of Idealism, is supported in part by Culturesfrance-French Ministry of Foreign and European Affairs, the French Ministry of Culture and Communication (Délégation aux Arts Plastiques), and the Cultural Services of the French Embassy in the United States.

About the Exhibition
Spatial City is an art exhibition inspired by the theoretical architecture of Yona Friedman. Friedman’s ideas, disseminated in the aftermath of World War II, have influenced subsequent generations. French thinkers and conceptual artists have responded to his designs as philosophical constructs worthy of exploration, explication and confrontation.

While Yona Friedman’s "utopia réalisable" informed the framework of the show, the selection of artwork reflects the cycling and recycling of optimism and cynicism in postwar culture. Artists in the exhibition are responding to society’s complex problems: the failed utopian social experiments that resulted in the dehumanizing conditions of Brutalist architecture, the rise and fall of totalitarian states, the tensions resulting from post-colonial immigration, and the destruction of the environment in the name of progress.

In keeping with Yona Friedman’s mutable design concepts—"mobile architecture" and "spatial cities"—the exhibition will add region-specific artists as it moves from Milwaukee, to Chicago, to Detroit. Chicago artist Jeff Carter, proposed by Allison Peters Quinn (Hyde Park), will install a work at Inova and Hyde Park, and Ben Hall, added by Luis Croquer (MOCAD), will undertake a site- specific project for the Detroit space. Each venue will also host its own residency artist.

About the Frac and Platform
Since 1983, the Fonds régionaux d'art contemporain, or Regional Contemporary Art Funds (Frac), have played an important part in the history of cultural development in France, promoting and defining the role of art in the life of the country through educational programs, cultural activities involving research and leisure, and the creation of knowledge that improves self-understanding and the understanding of others. Financed primarily by the national and regional governments, the Frac were designed to disseminate culture outside France’s capital, raising awareness of the art of our time among the broadest possible public. The Frac are charged with establishing a collection of contemporary French and international art in each region and disseminating it locally, nationally and internationally through the projects they implement. Each Frac has an identity, a collection, and a program of activities that lend it its specific character. Each collection designs programming around its holdings and exhibitions that inspire discovery and dialogue. Catalogues, books and periodicals expand these dialogues and share the work of artists with a broader audience. Today the Frac own a collection of more than 22,000 works of outstanding quality and great diversity by artists representative of the French and the international contemporary art scene. Platform is an association created in 2005 by the Frac to pool their resources and their collections, and to work together on collaborative projects both in France and abroad—such as Spatial City-- thus bolstering their impact and effect.

"The selection of works in Spatial City demonstrates the breadth and acuity of the Frac collections, which combine a deep commitment to French culture with a broad approach to collecting contemporary art," observes Frank. "Each Frac has its own curatorial vision, realized through its collection and programming, and when they are taken together, as this exhibition demonstrates, they form a more complete picture of contemporary art than most single museums can provide. To overlook the contemporary art of France and its diaspora is now to miss an essential facet of world culture."

Wednesday, February 3, 2010 at 7 pm in the Arts Center Lecture Hall, 2400 E. Kenwood Blvd.: Shedding Identity (Peck School of the Arts Artists Now! lecture series). In her most recent work, Kristina Solomoukha offers a view of a contradictory and fragmented territory- -spaces of transit, intermediate spaces between the private and the public--within which we are "passengers" rather than "inhabitants." Her process involves an analysis of the political, economic and social meanings of the urban landscape, and she presents her utopian situations and architectural projects in the form of models, drawings, installations, videos, slide shows and interventions in public space. Solomoukha uses humor, exaggeration and hybridization to push an existing aberration to the point where she can discern within its flaw a possible opening to a new utopia.

Friday, February 5, 2010 at 4:30 pm in the Architecture and Urban Planning Building, Room 170, 2131 E. Hartford Ave.: Travel Song Lyrics (School of Architecture and Urban Planning lecture series). In this lecture Solomoukha describes her practice through reference to two major works that influenced her theoretical approach and working methodology: The Man With a Movie Camera (Dziga Vertov, 1928) and Learning from Las Vegas, The Forgotten Symbolism of Architectural Form (Robert Venturi, Steven Izenour and Denise Scott Brown, 1972). Solomoukha, who is trained as both an artist and an architect, creates images by viewing her own experience through the prism formed by these works.

The 13th annual Festival of Films in French opens Feb. 5 with an 8 pm screening of Jean Becker’s Dialogue avec mon jardinier (Conversations with My Gardener). The 2007 film, which was never released commercially in the United States, celebrates the friendship of two former schoolmates, an artist and a gardener. (The film will be repeated on Saturday, February 6 at 9 pm.) The festival runs through February 14 and features thirteen films in French, nine of them Milwaukee premieres. All screenings take place in the UWM Union Theatre, 2200 E. Kenwood Blvd., and many are free. The Festival of Films in French is made possible with the generous support of French Ministry of Foreign and European Affairs, the Centre National de la Cinématographie, the Grand Marnier Foundation, the Florence Gould Foundation, highbrow entertainment, and the Franco-American Cultural Fund (Directors Guild of America, Motion Picture Association, SACEM & Writers Guild of America) for the Tournées Festival films; and Dr. Richard Stone, many UWM campus units, the Southeast Wisconsin Academic Alliance in French and the Alliance Française of Milwaukee.