Sabina Lang and Daniel Baumann were born in the early 1970s and have been working together for a decade now. Their instantly recognisable signature, L/B, serves as a kind of trademark, 'a sign indicating control', as one might concisely define it. But L/B does not stand for one of those impeccably marketed art multinationals that market their spin-offs in all the right emporia; rather, this is little family firm that jealously guards the secrets of its production. 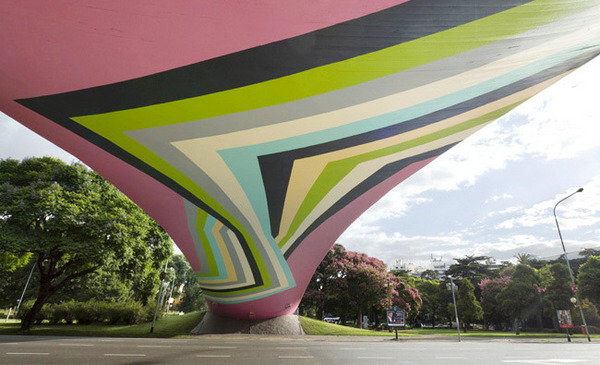 Sabina Lang and Daniel Baumann were born in the early 1970s and have been wor- king together for a decade now. Their instantly recognisable signature, L/B, serves as a kind of trademark, “a sign indicating control”, as one might concisely define it. But L/B does not stand for one of those impeccably marketed art multinationals that market their spin-offs in all the right emporia; rather, this is little family firm that jealously guards the secrets of its produc- tion. And their production is meticulous, not something rattled off on a frantic assembly line; it is made to measure, and nothing is subcontracted. It all starts in an old factory in Burgdorf, a small town in German-speaking Switzerland where green pastures and industry cohabit. The place is a cooperative, combining production, design and family life. Some may consider the model a bit shop-worn and unproductive, but for Sabina Lang and Daniel Baumann this is where they work towards the modestly utopian construction of a world that is more beau- tiful, gentler, rounder and more colourful, while at the same time elaborating their radical and rigorous art.

They are relaxed about embracing the forms and motifs of their childhood, those of the 1960s, without lapsing into nostalgia or reaction. References to the past are part of a strategy based on using familiar signs that link simultaneously to personal experience and the collective imagination. The artists seem to share the spirit of that age in which faith in the future and the breaking down of barriers between artistic disciplines combined with an uninhibited assimilation of popular culture; a time when music, architecture, art, design and social sciences moved forward together to the benefit of art. L/B respond to the disenchant- ment of the noughties with their “beautiful entrance”, their “beautiful walls”, their “beautiful lounges”, their “beautiful windows” and their “Spielfeld” (play area). For them, designing a bar, a table football set, a snooker table or even a hotel room holds the promise of a unique aes- thetic experience. Touching, using or inhabiting their spaces – their works are like invitations addressed to the spectator. The relational codes pertaining to relaxation, well-being and play are not an end in themselves but a simple and fresh means of access to the work through hedonistic exchange.

The materials and forms are chosen for the visual and functional qualities. The carpeting is soft, and has a considerable effect on the acoustics. The bright, plastic surfaces change the way we perceive dimensions and distances. The wall paintings and installations favour over- looking views, angles and kinetic motifs in order to heighten the effect of disorientation. L/B work by covering over what already exists (walls, roads, sports grounds). They act on the sur- face. Their all-over practice allows them to go beyond the wall as exhibition area and make free use of the floor, ceiling and furniture in their conception of environments. Their “beautiful walls” enact the transition from surface to volume, from two dimensions to three-dimensional space.

Neither besotted nor blind, Lang and Baumann are very much artists of their times. They perfectly master the potential of the forms they use and articulate their social and political corollaries (a wind of freedom and a belief in the capacity of politics to change so- ciety). Where design plays on seriality and wide distribution, L/B propose works that inflect commercial logics. The Hotel Everland consists of a single room. To reserve it, a potential client will have more need of persistence than of money. Where architecture is built and conceived in the long term, L/B’s environments place the emphasis on ephemeral forms linked to pre- existing architectural spaces, notably the white cube. In materialising their pragmatic vision of exhibition spaces and their habitability, L/B dispel all ambiguity: for them, the everyday experience of architecture and design will always be an art, and not a function in lieu of an eventual utopia.