From a Future Perspective. This lecture series draws attention to a number of important social and specifically artistic themes which are closely related to the hybrid 'discourse of the future.' Over the course of 7 evenings, speakers of different generations - art historians, curators, and critics - will shed new light on various topics. 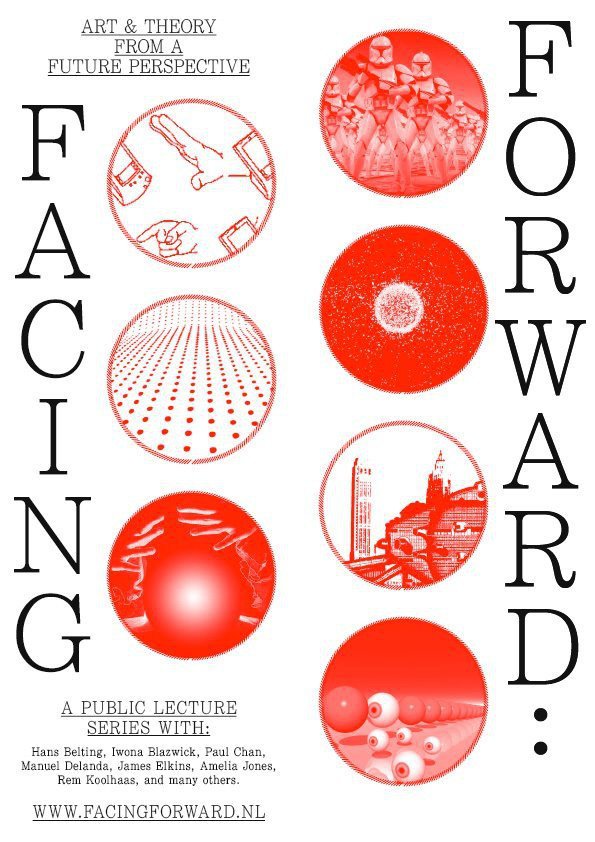 Following the successful lecture series and publications Right About Now: Art & Theory in the 1990s and Now is the Time: Art & Theory in the 21st Century, the Stedelijk Museum Amsterdam, the University of Amsterdam, the Appel arts centre, W139, the Stedelijk Museum Bureau Amsterdam and Metropolis M are presenting the lectures and series of debates, Facing Forward: Art & Theory from a Future Perspective, in collaboration with partner institutes, including the Rijksakademie voor Beeldende Kunsten (National Academy for Visual Arts) and the Goethe Institute.

Contemporary art today is mainly about yesterday. Archiving, nostalgia, commemoration, memory, re-enactment, reconstruction, and documentation are popular themes and methods in the art world. Artists, curators, and theoreticians adopt a retrospective view in which they set out like archeologists to excavate and expose things from the past. Theoretician Dieter Roelstraete describes this trend as “the historiographic turn,” which can be largely explained by the tumultuous social developments of the last ten years. However, the use of this historical refuge carries the risk of a certain blindness. Looking back can obscure the view of the present and the future, and make it more difficult to be open to the creative potential of the unknown and the unexpected, despite this being exactly what we need in these turbulent times.

In this lecture series, Facing Forward: Art & Theory from a Future Perspective, our heads turn in the other direction and our eyes focus on the horizon of the unknown. In light of broader social developments, this orientation corresponds well with our time. In addition to the fact that financial speculation comprises one of the key aspects of contemporary (neo-)liberal society, we are inundated on a daily basis with expectations of future matters. A kaleidoscope of utopias and dystopias, time travel, cyborgs, aliens, and artificial intelligence, testaments of acceleration and progression or damnation and destruction, based on prophetic predictions and quasi-scientific arguments, feeds both our hopes and fears for what is to come.

This jungle of ideas cries for a critical vision and substantive reflection. Facing Forward: Art & Theory from a Future Perspective draws attention to a number of important social and specifically artistic themes which are closely related to this hybrid “discourse of the future.” What will art and art theory bring us? How can they change the way in which we experience the future? What role do technology, globalization, science, and politics play in this? What does it mean to look forward, to speculate, to extrapolate? Is it possible to develop a vision of the future outside these well-worn paths of utopia and dystopia? Over the course of seven evenings, celebrated international speakers and young art historians, curators, and critics will shed new light on the future of technology, freedom, the concept of history, the position of the image, eloquence, the museum, and the city.

Obviously, it is an illusion to think that we can escape the past by means of this view of the future. As Walter Benjamin described, progress is an angel positioned with its back to the future and blown forward by the wind of history. Nevertheless, this series of lectures aims to turn Benjamin’s angel around so that she faces the future. Similarly, in Italo Calvino’s novel The Invisible Cities, Marco Polo always longs for what is in front of him precisely because the present and the past also change shape in this way: “Arriving at each new city the traveller finds again a past of his that he did not know he had. The foreignness of what you no longer are or no longer possess lies in wait for you in foreign unpossessed places.” Calvino links the present, the future, and the past together here. He talks about looking forward to find answers to the past and present. In these interwoven periods of time, which can also be found in popular TV series like Heroes and Flash Forward (where the answers to today are always found in the future), we are like time travellers, going back to the future to get a grasp of our own history. Facing Forward!

Following the lectures and debates, the organization of Facing Forward: Art & Theory from a Future Perspective is inviting the speakers to present a workshop. These workshops will take place on the day after the lecture and a maximum of 25 participants can take part.

All lecture evenings will take place at: