Where Are We Going, Walt Whitman?

An ecosophical roadmap for artists and other futurists. An energetic four-day-long voyage with artists, poets, writers, thinkers, activists and musicians. 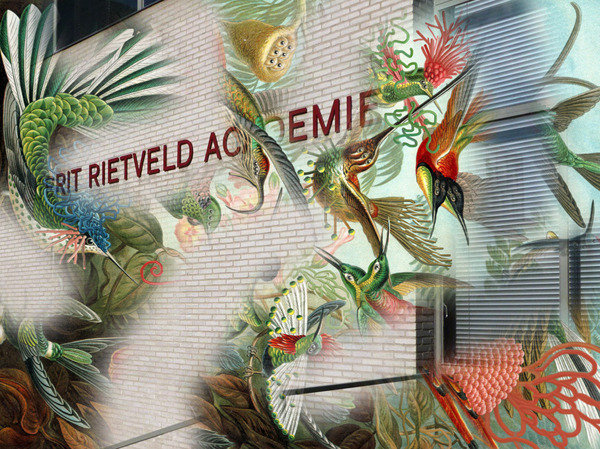 By exploring the potentialities of ecological worldviews, old and new, through theory and art, WAWGWW seeks to accelerate, accumulate, animate and activate our poetical and political understanding of the world. To this aim Gabriëlle Schleijpen, head of Studium Generale Rietveld Academie invited Anselm Franke, Binna Choi, Carolyn Christov-Bakargiev as well as Natasha Ginwala & Vivian Ziherl to each inaugurate a discursive and performative program of one day. In their scintillating company plus that of the artists, poets, writers, thinkers, activists and musicians they've teamed up with, the Gerrit Rietveld Academie will embark on an energetic four-day-long voyage. If around in Amsterdam you are most welcome to join.

Tuesday March 12:
Blue Marble
The image of planet earth has become an icon of the last utopias of the 20th century: of living in ecological harmony with nature, and of the creation of a borderless world.

Focussing on the countercultural movements of California in the '60s and '70s, Pop theorist Diedrich Diederichsen will speak about concepts of wholeness and changing symptoms of the new "planetary consciousness." Curator Anselm Franke will discuss the Whole Earth Catalog, and the relation between "animism" and "cybernetic ecology." Philosopher Erich Hörl will introduce the origins of the contemporary ecological paradigm.

Armin Linke will present from work on political and scientific institutions engaged with global planning. The Otolith Group will present from an ongoing research into the spiritual- and self-help industry of California, Angela Melitopoulos will speak about the relation between geography and psychiatry. Flora Lysen will share from her research into the brain sciences at the intersection of psychedelia and ecology.

The term "China Syndrome" was used in the 1970s to refer to a hypothetical nuclear meltdown in the US that would burn all the way through the earth and reach the other side: China. Today this erroneous hypothesis lives on in the other direction. "On the other side" Post-Fukushima Japan calls for a new kind of earthly imaginary and a field of discourse beyond language of fear and humanitarian appeal.

"Japan Syndrome – Amsterdam Version" brings together performative, anarcho-urbanist, feminist psychoanalytic, cinematic, sci-fi, self-organising, archival and electro musical perspectives into the disasters that can no longer be categorized as either "natural" or "man-made." Meshing discursive moments with mourning rituals and visions of possible futures, it attempts to open up a new imaginary landscape of the commons.

Curators Natasha Ginwala and Vivian Ziherl draw upon Land as a narrative subject of history.

Erick Beltrán will give a lecture-demonstration on his "Map of maps." Angela Melitopoulos will discuss her recent film Two Maps (in collaboration with Maurizio Lazzarato), looking into post-Fukushima Japan, animist traditions and Guattari's trip to Okinawa. An interactive performance lecture jukebox by Olof Olsson offers everything from the history of science (the invention of the modern combustion engine) to Olsson's biography.

On the 15th of March a ship will be sailing along the lines of some thoughts [....]
Meanwhile everybody congratulating everyone on something happening possibly close possibly far.[....]

This perspective towards a de-anthropocentrization of thought and a multispecies co-evolution of intra-actions and interactions proposes to move away from the opposition between the human and the so-called 'natural' [....]
[....] so that it is possible to consider artistic practice as a process of compost-making [....]

Taking art as the shared capacity of letting things and beings to create their own meaning and expressing it, we follow a day of chained conversations on agencies of animals, the politics of worlding, the artist as "instaurateur," hypnosis, instrumental mediations and social change.

(excerpts from a collectively written text)