The Armory Show is pleased to announce The China Symposium, a program of conversations that aims to elaborate and clarify the state of contemporary art in China today. Eight discussions will be held over the two most visited days of The Show. 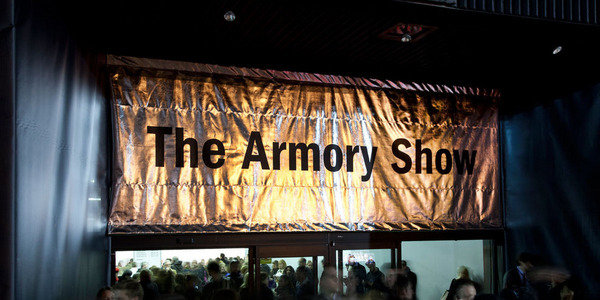 Organized by Philip Tinari, Director of the Ullens Center for Contemporary Art, Beijing

In partnership with Mr. Adrian Cheng and the K11 Art Foundation

New York - The Armory Show is pleased to announce The China Symposium, a program of conversations that aims to elaborate and clarify the state of contemporary art in China today. In partnership with Adrian Cheng and his art foundation, a series of eight discussions will be held over the two most visited days of The Armory Show (March 8-9, 2014). The China Symposium will assemble speakers from around China and beyond, including leading artists, journalists, curators, collectors, gallerists, and academics. The Symposium is held in conjunction with the Armory Focus: China section of the fair, which is being curated by Philip Tinari, Director of the Ullens Centre for Contemporary Art, Beijing, and will provide new insight into contemporary cultural practice in China through an exciting selection of galleries from the Mainland and Hong Kong. The first day of the forum explores circumstances and dynamics shaping the external environment, while the second day looks at significant currents in art itself. Together the two days offer perhaps the most comprehensive overview of the art scene in China yet undertaken for a general New York audience.

Adrian Cheng is founder and chairman of the K11 Art Foundation, Hong Kong, which provides a springboard to launch emerging Chinese artists into the global arena through an array of groundbreaking initiatives, including the K11 art spaces, educational programs, and artist-in-residence programs. In line with the Foundation’s mission to generate international dialogue surrounding the development of Chinese contemporary art, it has made The Armory Show’s China Symposium possible, marking an ambitious expansion of the fair’s long-standing Open Forum discussion series. The Foundation recently provided educational programming support for Ink Art: Past as Present in Contemporary China at The Metropolitan Museum of Art.

Adrian Cheng comments, “We are the new generation to define the contemporary art landscape of China, and it is my privilege to be part of this dynamic change by nurturing and incubating artistic talents in Greater China. Chinese society is at an important crossroad, and Chinese contemporary art is reflecting the key social and economic developments in China today. As we help young Chinese artists gain recognition at home and abroad, we hope to help educate the wider public about art. We are constantly inspired and humbled by the voices underlying great works of art, and we believe The China Symposium and The Armory Show 2014 will be a milestone for Chinese voices to find a greater audience.”

On his multifaceted involvement in the fair, Philip Tinari notes, “my goal is not only to add a further layer of depth to the broader China Focus initiative, but also allow for a new set of relationships and understandings—interpretive, experiential, cooperative—about art in China today to emerge.”

Noah Horowitz, Executive Director of The Armory Show states, “It has been an honor to forge this partnership with Adrian and the K11 Art Foundation. The Foundation’s support in helping to realize The China Symposium has been immeasurable and we look forward to introducing the important work that they are doing in Greater China to our wide-reaching audiences in New York City.”

China’s rise to global power has brought about an unprecedented level of openness to the outside world, paradoxically paired with an acute sensitivity to dissent from both inside and beyond. What do these new dynamics mean, especially for the art world? What are the connections between political developments and decisions at the highest levels and the position of contemporary art in the public culture? Now that a new group of leaders has decisively taken the reins, what do we have to look forward to, and what if anything should we fear?

The Chinese Art World Described As A System

A long legacy of censorship, speculation, and pay-for-play practice at museums and in the media has created the perception of a deeply flawed system for contemporary art in China. And yet in recent years a crop of enlightened academic departments, dedicated galleries, curious collectors, ambitious foundations, and public institutions has emerged to counter this earlier understanding. Nodding to Lawrence Alloway’s 1972 studio-to-market analysis of the Western art world, this panel asks what is distinctive about the models that have emerged on the ground in China, and what, perhaps, they might have to teach us.

All across China, fusty state museums are being rebirthed with stunning facilities, while private institutions are launching in record numbers and in many different forms. China’s vaunted “Museum Boom” is creating spaces for the display of contemporary art on a scale never before imagined, raising key questions about the publics these places envision for themselves as well as their ability to sustain operations and programming in the long term. What is behind this sudden urge, both public and private, to establish new spaces? What will it ultimately mean for artistic production, circulation, and consumption in China and globally?

The Market These Days

For Chinese and Western audiences alike, interest and concern for the contemporary art scene in China has generally begun with the market. This past autumn saw the establishment of salesrooms in the Mainland by both of the major Western auction houses and new records for both a living Chinese artist and a work of Western art purchased by a Chinese collector. Chinese collectors have emerged in droves, particularly in second- and third-tier cities once thought beyond the purview of the art market. Still, questions of transparency, authenticity, and sustainability persist. What lies ahead for China’s art market? What sort of impact will China’s expanded buying power have internationally? How will domestic policies on taxation and import affect collecting trends? And are the market mechanisms for conferring and transferring value fundamentally sound?

A standard art-historical narrative on contemporary Chinese art—beginning with the movements of the late 1970s, and running through the 1980s “New Wave” and 1990s experimentation to our current thriving moment—started to coalesce in the mid-2000s. Like any important history, its writing has been subject to competing claims from different players with specific agendas. Through volumes such as Wu Hung’s anthology “Chinese Contemporary Art: Primary Documents" and groupings of work like the M+ Sigg Collection, an account of art as a force for openness and exploration is taking shape, perhaps in counterpoint to an increasingly confident Party narrative which sees the contemporary as a manifestation of China’s cultural strength. Can these two accounts coexist?

The quintessentially Chinese medium of ink painting is seeing a contemporary resurgence. From the establishment of galleries devoted specifically the cause, to the current survey at the Metropolitan Museum of Art, which takes ink as a starting point to map contemporary art in China more broadly, the brush is proving a renewed source of fascination. Fed by the twin trends of a domestic collector class ever more deeply interested in rediscovering tradition, and a group of younger artists looking for ways beyond more standard (Western) media, this vogue is also coming up against practitioners who have been working in and with ink all along, often without wider recognition. What does this new wave of attention and interest in ink mean for Chinese art more generally?

The On | Off Generation

A new generation of artists has emerged, less concerned with overt political symbols and cultural identity than with conceptual processes and international dialogue. Driven by the instantaneous proximity to global networks that is one hallmark of our present, these artists are making work that does not “look Chinese,” even as they continue to engage with their country’s endlessly fraught and complex realities. The title of a major generational survey mounted in 2013 at UCCA, “ON | OFF” refers to the graphical interface of a common VPN software that many in China, artists included, use to scale the Internet firewall; it invokes a dichotomy that structures many aspects of their life and practice. Many of these artists are present in the Focus: China section. Who are they, and what are their concerns?

Known for his versatile and subversive interventions, this year’s Armory Artist Xu Zhen (b. 1977, Shanghai) is a major force on China’s art scene today. His retrospective “Xu Zhen: A MadeIn Company Production,” on view at the UCCA in Beijing as he takes the stage at The Armory Show in New York, offers the most thorough overview of his fifteen-year output to date. This discussion brings together several expert observers of his work to put his practice, and his commission for The Armory Show, into context.

With special thanks to Michelle Darnell for her assistance in organizing this program.