Area 21. In the center of the exhibition is a 2.5 meter enlarged skull of the Saber Tooth Tiger, an extinct pre-historic animal, which was characterized by particularly long upper fangs. 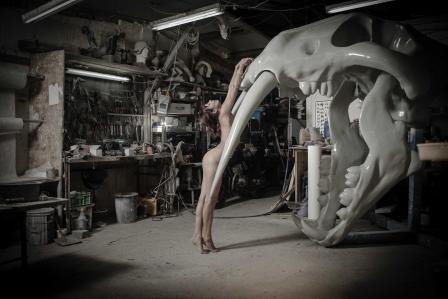 Raw Art Gallery is pleased to announce the opening of "Area 21" a solo exhibition by Adi Nachshon.

In the center of the exhibition is a 2.5 meter enlarged skull of the Saber Tooth Tiger, an extinct pre-historic animal, which was characterized by particularly long upper fangs.

Nachshon uses an aesthetic language taken from heavy metal, glam metal and power metal imagery and specifically from 80's biker bands such as "Judas Priest", "Motorhead", "Iron Maiden", "Accept", "Kiss", and "ANNIHILATOR". The visual aspect of their performance – the stage design, the costumes, the album covers, etc. – is integral to their identity and the metal genre as a whole.

The world of metal imagery is composed of satanic, pre-historic, medieval dark worlds, from fantasy, horror, and from the frequent connection of death and sex. The use of these elements is to protest against mainstream culture, to declare the conscience selection of hell over heaven, as a fundamental heresy in the values of the conservative world. The skull is a popular icon in the metal community and appears in the form of both human and animal skulls- such as cow, goat or a monstrous hybrid of Satan/ beast. "The Beast", a basic concept in metal culture is connected to the fantasy of a pagan, barbaric, hedonistic world.

Nachshon chose for the exhibition archaeological findings of pre-historical creatures, as the basis for structural alterations of the original form. Nachshon manipulates the historic evidence and instead provides a historic distortion.

The skull sculpture "The Idol" is polished, smoothed and painted with industrial motor colors, which take the organic creature and give it an alien-like character, transforming it into a beast-machine or beast- car. This is the fantastical, sci-fi, imaginary, extreme and horrifying version of the pre-historic animal. While the fetishistic installation stands in the midway between a museum of natural history, a pagan altar-piece, a heavy metal concert set and a car exhibition.