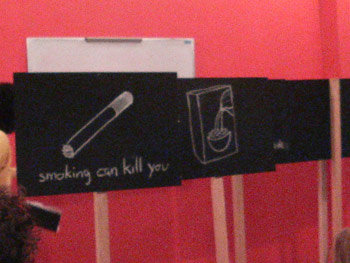 A series of blackboards are installed in the auditorium. Objects sketched in chalk on the boards serve as coordinates for a forty-minute theoretical walk-through. The drawings function as links to theory, personal experiences, and questions that arise from problems with representational formats. The walk-through operates in between those coordinates, reflecting on defacement, renaming, and other possible and impossible ways of confronting representations one can't get rid of: representations that, through their apparitional features, block the access to situations, to negotiation and to change.

Natascha Sadr Haghighian works in the fields of video, performance, computer, and sound, and is primarily concerned with the sociopolitical implications of constructions of vision from a central perspective and with abstract events within the structure of industrial society, as well as with the strategies and returning circulations that become apparent in them.

Instead of a CV, Natascha Sadr Haghighian started http://www.bioswop.net, an Internet platform for CV-exchange where artists and other cultural practitioners can borrow and lend CVs for various purposes. The aim is to have more and more people exchanging their CVs for representational purposes. For more information go to http://www.bioswop.net

The corridors of a nearby store serve as the matrix for a conversation and critical reflection on presenting and representing as two different approaches to the political. Referring to concepts of the performativity of language and the operative and transformative power of "speaking the object," Thomas Keenan and Natascha Sadr Haghighian discuss political agency that overcomes the distance of representation.

Haghighian and Keenan navigate through a selection of the store's objects and functions, which serve as coordinates for the conversation, while a video image of the store's interior is broadcast in the auditorium.

Thomas Keenan is Director of the Human Rights Project and Associate Professor of Comparative Literature at Bard College. In the field of human rights, he has worked with the Soros Documentary Fund, WITNESS, and the Journal of Human Rights. He is the author of Fables of Responsibility: Aberrations and Predicaments in Ethics and Politics (1997), and editor of New Media, Old Media (2005), and The End(s) of the Museum (1996).

The corridors of a nearby store serve as the matrix for a conversation on subjugated knowledges and how research is related to one's ability to act. The apparitional state of some realities that have no lobby in the politics of representation are taken into consideration as a force of urgency and change.

Natascha Sadr Haghighian and Avery Gordon navigate through a selection of the store's objects and functions, which serve as coordinates for the conversation, while a video image of the store's interior is broadcast in the auditorium.

Avery Gordon is a Professor of Sociology and Law and Society at the University of California, Santa Barbara and Visiting Faculty at the Centre for Research Architecture, Goldsmiths College, University of London. She is the author of Keeping Good Time: Reflections on Knowledge, Power and People, Ghostly Matters: Haunting and the Sociological Imagination, and the editor of Mapping Multiculturalism and Body Politics, among other works. Her most recent articles on imprisonment and the War on Terror were published in Race & Class and Le Monde Diplomatique. Her current writing aims to comparatively understand the nature of captivity and confinement today, its means of dispossession, and what's required to abolish it. Since 1997, she has co-hosted No Alibis, a weekly public affairs radio program on KCSB 91.9 FM, Santa Barbara.

Night School is an artist's project by Anton Vidokle in the form of a temporary school. A yearlong program of monthly seminars and workshops, Night School draws upon a group of local and international artists, writers, and theorists to conceptualize and conduct the program.

All events are free with Museum admission but tickets are required. Tickets can be reserved online or at the Museum one week before the seminar's start; a limited number of tickets will be available one hour before each event's start. Tickets are limited, distributed on a first-come-first-serve basis, and must be collected prior to the event's start time. Unclaimed tickets will be released promptly at the event's start time. Please check individual events below for tickets and more information.

Museum as Hub is made possible by the Third Millennium Foundation.  With additional generous support from the Metlife Foundation. Additional support is provided by the National Endowment for the Arts, the New York City Department of Cultural Affairs, and the New York State Council on the Arts. Endowment support is provided by the Rockefeller Brothers Fund, the Skadden, Arps Education Programs Fund and the William Randolph Hearst Endowed Fund for Education Programs at the New Museum. Generous support also provided by the Charlotte and Bill Ford Artist Talks Fund.