We, Ourselves and Us 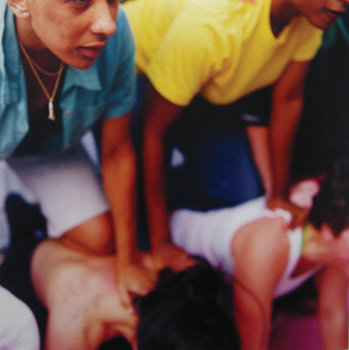 Combining perspectives from artists, philosophers and curators, this international symposium considers current ideas and reconceptualizations of communities and collectivity. Taking its cue from Nina Möntmann's guest-curated exhibition at The Power Plant, 'If We Can't Get It Together', the symposium traces the creation of temporary social formations.

On Friday evening, Simon Critchley will present the keynote address—a presentation entitled 'Mystical Anarchism'. His address will be moderated by Ian Balfour (Professor of English at York University).

Simon Critchley was born in Hertfordshire, England, in 1960, and currently lives and works in New York as Professor of Philosophy at The New School for Social Research, where he works in continental philosophy, history of philosophy, literature, ethics, and politics. He failed dramatically at school before failing in a large number of punk bands in the late 1970s and failing as a poet some time later. This was followed by failure as a radical political activist. By complete accident, he ended up at university when he was twenty-two and decided to stay. He found a vocation in teaching philosophy, although his passions still lie in music, poetry and politics. His books include The Ethics of Deconstruction (1992), Very Little... Almost Nothing (1997), On Humour (2002), Things Merely Are (2005), Infinitely Demanding (2007) and The Book of Dead Philosophers (2008).

The Saturday symposium is structured around a series of two-person presentations followed by discussion. Speakers include:

- Carlos Basualdo (Curator of Contemporary Art at the Philadelphia Museum of Art),

- Luis Jacob (Toronto artist featured in 'If We Can't Get It Together'),

- Maria Lind (Director of the Graduate Program at the Center for Curatorial Studies, Bard College),

- Nina Möntmann (Curator of 'If We Can't Get It Together' and editor of Art and Its Institutions, 2006),

The symposium will conclude with a screening of Nicoline Van Harskamp's video To Live Outside the Law You Must Be Honest (2005–6). Inspired by her stay as a 'Researcher in Residence' in Denmark's Freetown of Christiania, Van Harskamp's trilogy is comprised of three scripted video works, each performed by the same actor in different roles. Each draws very different conclusions through exploring issues of government, freedom and participatory democracy.

We, Ourselves and Us is organized by The Power Plant in association with the journal Public and with the collaboration of the Goethe-Institut, Toronto. A special issue of Public arising from the exhibition and symposium and edited by Nina Möntmann will be published in 2009.