Thyssen-Bornemisza Art Contemporary celebrates Istanbul's art program in the framework of European Capital of Culture 2010 with the sonic pavilion 'The Morning Line' by Matthew Ritchie and ArandaLasch. An impressive 8 meter high and 20 meter long pavilion, built of 17 tons of black coated aluminum that explores the disciplinary interplays between art, architecture, music, mathematics, cosmology, and science. 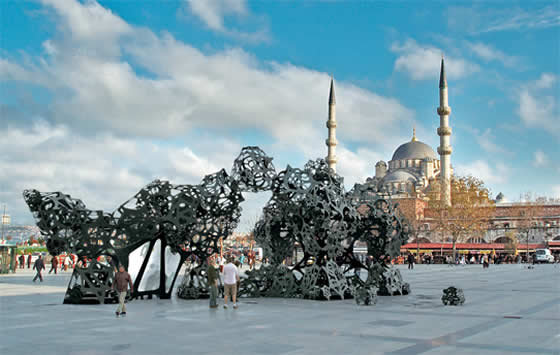 Thyssen-Bornemisza Art Contemporary celebrates Istanbul's art program in the framework of European Capital of Culture 2010 with the sonic pavilion The Morning Line by Matthew Ritchie and ArandaLasch. The Morning Line – an impressive 8 meter high and 20 meter long pavilion, built of 17 tons of black coated aluminum – explores the disciplinary interplays between art, architecture, music, mathematics, cosmology, and science. For the artists, 'Istanbul is the perfect combination of location and content for The Morning Line: the calligraphic design of the structure represents a contemporary version of the sacred geometry found in byzantine and ottoman architecture. As an emerging urban focus for the 21st century and a uniquely layered historic site, Istanbul offers a truly global audience for the sonic spaces and layered narratives of the work.'

Developed during a 3-year research period, The Morning Line is challenging architectural convention: The team of collaborators has designed the first semasiographic building, a non-linear architectural language, based on fractal geometry and parametric design that directly expresses its content through its visual structure. One of the main goals in The Morning Line was to create an architectural language where geometry and artistic expression are intrinsically united, located on the same level. To achieve this, the New York based architectural duo ArandaLasch and specialists from Arup AGU designed a construction element called 'the bit' whose shape is derived from a truncated tetrahedron. The bit can be scaled up and down to any imaginable size, potentially even the size of the universe. This architectural system being infinitely self-scalar, these modules assemble with other similar bits to expand or contract in any direction.

As one of its essential elements, the artist conceived the pavilion's sonic identity. The Morning Line is saturated with fifty speakers, using a unique interactive ambisonic sound system, conceived by the Music Research Centre of York University. As a result, the scope of the structure itself and its novel spatialization software suggested a new form of music – music written for this new kind of instrument.

T-B A21 has invited an international group of composers whose work lies beyond the boundaries and the programming of traditional concert halls, to open up this forum to experimentation with different approaches and points of departures: sometimes following the artistic concept of The Morning Line and developing a program of overlapping scores that musically parallel the fractal scaling of the architecture and speaking directly to its complex internal narratives; or taking the complementary approach, with creating self sufficient works that treat the structure as an autonomous and mysterious form of novel performance space and are diffused as autonomous works.

For the presentation in Istanbul guest sound curator Russell Haswell has invited Jana Winderen, Peter Zinovieff, Carl Michael von Hausswolff, and Yasunao Tone to conceive new sonic works, commissioned by T-B A21. Two other new works by Ghostigital and Jónsi & Alex are also being presented for the first time in Istanbul. As The Morning Line continues to travel the world as a platform for contemporary music, and within its mandate to encourage and support the production of innovative composition wherever it tours, T-B A21 has entered a partnership with ITU - MIAM, Centre for Advanced Studies in Music, Istanbul, under the guidance of Melih Fereli, former director of the Istanbul Foundation for Culture and Arts (IKSV), Kamran İnce, and Cihat Aşkın and has commissioned new compositions by Erdem Helvacıoğlu, Cevdet Erek, Mehmet Can Özer, and Batuhan Bozkurt.

These ten new compositions will be presented as world premieres in Istanbul, during the festival that will follow the opening ceremonies on the 22nd of May and run for the following three day. They will be added to the existing archive of music and soundscapes selected by the previous guest curators Florian Hecker and Bryce Dessner which will be replayed in The Morning Line throughout the exhibition period over the following months. These include collaborative works by Bryce Dessner, David Sheppard with Evan Ziporyn, Mark Fell with Roc Jiménez de Cisneros, and solo compositions by Bruce Gilbert, Florian Hecker, Lee Ranaldo, Chris Watson, and Thom Willems.