A reworking of Yvonne Rainer's classic 1966 dance performance Trio A. Choreographed by Tanja Tuurala, the performance uses many of the original elements of Rainer's seminal work but reinterprets them in the particular social and political context of Tensta 2010 rather than Greenwich Village in the Sixties. 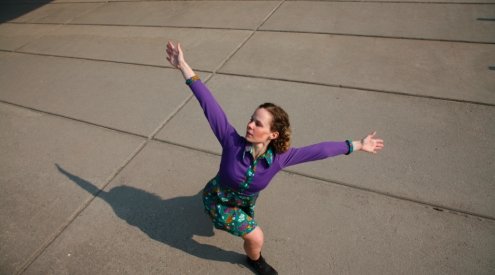 Following the success of our sold out performances of Öyvind Fahlströms "Det Hårda och det Mjuka", Tensta Konsthall is proud to present a reworking of Yvonne Rainer's classic 1966 dance performance Trio A first presented by The Judson Dance Theater in New York.

TRIO ABC choreographed by Tanja Tuurala uses many of the original elements of Rainer's seminal work but reinterprets them in the particular social and political context of Tensta 2010 rather than Greenwich Village in the Sixties. Working in collaboration with Rani Alhallak a young dancer and student at Tensta Architecture School, the work adds another political dimension to Rainer's original. As Tuurala describes it;

"Trio A lands in Tensta. Local movements add impact. Trio A moves through time. Music and actions are added. At every performance a theme that has been chosen by one of the dancers or by someone else that is seen needing attention is introduced. The theme is presented to the audience prior to each show. "

The original work Trio A emerged out of a clear feminist political intention tosublimate the voyeuristic aspects of dance. The body, the female body specifically was re-contextualised without the coquettish and seductive trappings associated with much modernist dance. As much as Sixties sexual liberation was seen as just that; a liberation, but it also quickly became another form of subjugation. Rainer's work is critically positioned as a questioning of the relation of audience to dancer and in Trio A the dancers never make eye contact with the viewer thus repudiating any intimacy, refusing the gaze.

Trio ABC is no less political but there are marked differences. Although Rainer and The Judson Dance Theater were concerned about issues of race and ethnicity it would be wrong to see this as a central focus. To perform Trio A in Tensta is to add a recognition of the marked site of difference that Tensta represents. The work is a duet between an experienced dancer and a novice. In this respect Tuurala is following Rainer's original plan of making the piece without an immediate relation to expertise. In the many versions that have been staged of the work there have been dancers and non dancers included and part of the intention of the original was a denial of the trained dancer's body as the sole proprietor of dance itself. It will be fascinating to see how a classic work of postmodern dance takes yet another turn.