De la casa al museo. The workshop, aimed at the general public, is organised into four sessions, of which the first will be a lecture open to the public. Tania Bruguera is an interdisciplinary artist working on political issues primarily through behaviour art, performance, installation and video. 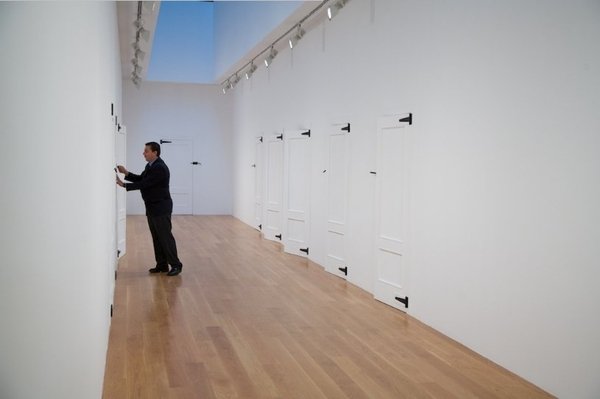 This workshop, given by the Cuban artist Tania Bruguera, is aimed at the general public, anyone who has never produced a work of art and is perhaps unfamiliar with contemporary art but who wishes to take part in this experience and discover a new world, at least this once.

The workshop is organised into four sessions, of which the first will be a lecture open to the public.

PROGRAMME AND TIMES
Session 1 (Thursday 3rd June)
Time: 4 – 8 pm.
Session open to the public and to the participants of the workshop.

Lecture by Tania Bruguera open to the public.

Workshop participants will float questions and doubts regarding contemporary art in general to spark up a conversation in which these can be commented and discussed. Someone from the MARCO will show certain works made for the Museum to support discussion. The participants will choose one work of their liking.

Participants will execute a reinterpretation of their selected work of art that also incorporates elements from their day-to-day lives. The resulting pieces do not have to resemble the work of reference, but they must retain a closeness as regards theme.

The last session will be devoted to completing the participants’ projects, which will be exhibited in a final presentation.

Tania Bruguera is an interdisciplinary artist working on political issues primarily through behaviour art, performance, installation and video. She has been a participant in Documenta, Performa, two Venice, Gwangju and Havana Biennials. Her work has also been exhibited at mayor museums in Europe and the United States, including the Tate Modern, The Whitechapel, Gallery PS1, the ZKM, IVAM, Kunsthalle Wien and The New Museum of Contemporary Art. Her work is part of the collection of the Tate Modern; Museum für Moderne Kunst; Daros Foundation; Museum of Modern Art; Museo del Barrio; Bronx Museum; IVAM; Museo Nacional de Bellas Artes, Centro de Arte Contemporáneo Wifredo Lam. In 1998 she was selected as a Guggenheim fellow (The United States) and in 2008 she was awarded the Prince Claus Prize.

Bruguera’s work focus on the relationship between art, politics and life. Among them, art is conceived as an experience to be crossed and as an space for utopian projects. She is mainly interested in the insertion of art in everyday politic life. Since 2002, — with the creation of the Cátedra Arte de Conducta, an alternative project by the art college in Havana — she began a series of projects where she deals with structures appropriation and power resources. She is no longer interested in representing just politic situations, but in creating them by setting into motion in her work some of those strategies used by the political forces. Her work, most of the times ephemeral due to the usage of life actions, fragile material or both, reflects the condition also ephemeral of any political truth.

Workshop aimed at the general public
[Of the 15 places available, 12 are for people not directly involved in the art world and 3 are for artists, students and art critics, both professional and in training.]

FREE. PRIOR ENROLMENT AND MATRICULATION NECESSARY. Maximum number of places: 15
Enrolment until 30th May