Public Service Announcement is a three-day video festival with a video retrospective from the Show Cave Archives, a project of Lucas Ajemian and Julien Bismuth and a program featuring creative documentary work. 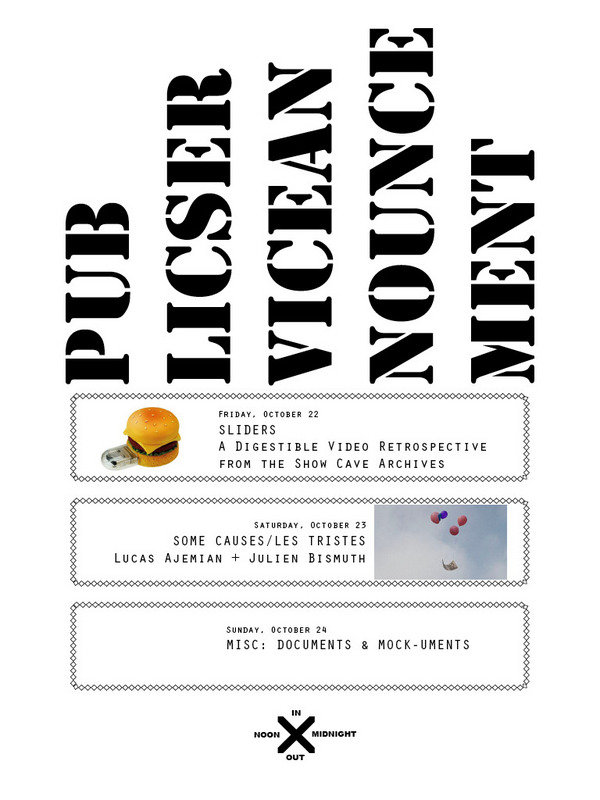 Invisible-Exports is pleased to present Public Service Announcement, a three-day video festival, featuring a new video program each day from noon through midnight. The programs will be viewable from both inside the gallery and outside on the street.

SLIDERS is a 2-hour program of a selection from our ongoing video series. The selections come from past video shows which were curated by Hazel Hill McCarthy III for Show Cave including Permanent Vacation, Spread Eagle, Quartz Qube, Moon Illusion, Future Heat and Summer Sizzlers.

Lucas Ajemian and Julien Bismuth have been a collaborative duo since 2005. Their work addresses the idea or ideal of authorship, the nature of work, the shape of communication and the contours and limits of creative activity. They have exhibited together at the Galerie Georges-Philippe & Nathalie Vallois, Paris (2008); Galerie Parisa Kind, Frankfurt (2006), the Orange County Museum, Newport Beach, CA (2008), Foxy Productions, New York (2008) and at Invisible-Exports (2010). Screening includes Some Causes (2008) and Les Tristes performances from 2007 – 2010.