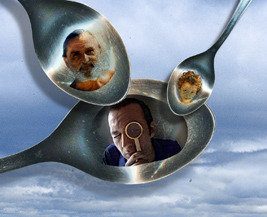 In a kitchen stands a father with his son as just parents know how to be. The child is hungry, but this time he just wants the soup that his grandfather prepared. Then the father goes in search of the bean soup recipe his own father had. Old aunts, childhood friends and neighbours help him on this trip. He remembers that the soup had a sound, and maybe that was the secret recipe. But what was that sound? This gastronomic thriller tells us about the handover and the constant transformation of children into parents, parents into grandparents, grandparents into...