In collaboration with Kunstenfestivaldesarts, Wiels presents Belgian artist's new project around his feature film Spectres (102 min). Renowned as a subtle chronicler of the city, Augustijnen here establishes a link between its current vocation as administrative capital of Europe and its colonial past. 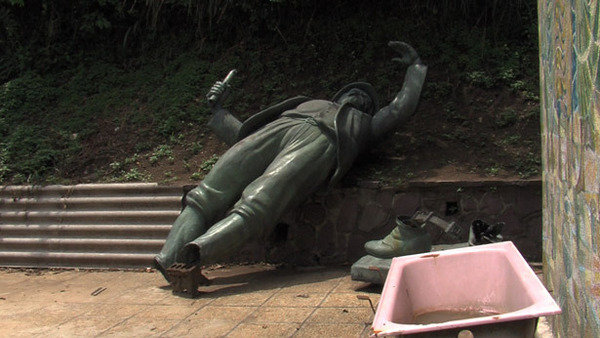 In collaboration with Kunstenfestivaldesarts, WIELS presents Belgian artist Sven Augustijnen's new project around his feature film Spectres (102 min). Augustijnen has gained national and international recognition for his films describing the cultural specificity of familiar places, such as the Royal Park or the Mont des Arts neighbourhood, both in Brussels. Renowned as a subtle chronicler of the city, Augustijnen here establishes a link between its current vocation as administrative capital of Europe and its colonial past. This documentary film essay recalls one of the darkest chapters in the decolonisation of the Belgian Congo: the events which lead to the assassination of Patrice Lumumba, Congo's first democratically elected prime minister.

In Spectres the main thread of the story is constructed in the form of a voyage, a typical Augustijnen method. The main character is Jacques Brassinne de La Buissière, a former high-ranking civil servant and protagonist in the political and humanitarian 'thriller' that unfurled after the hasty decolonisation decision, the transfer of power and the subsequent conflicts, up to and including the imprisonment and execution of Patrice Lumumba on 17 January 1961. He acts simultaneously as guide, commentator and symbolic figure, and we follow him through many crucial historical sites and symbolical moments. In the course of these peregrinations, questions arise about the manifest and hidden motivations behind the historic events of a still largely unresolved past, issues that continue to haunt past and present. These events have shaped a relationship fraught with difficulties between Congo and its old colonial power, recently expressed during a parliamentary committee of inquiry into the responsibility for the assassination and on the occasion of the commemorations marking the transfer of power, as well as in the intentions of Lumumba's immediate family to bring proceedings against those involved where they are still alive.

Through this 'travelogue' Brassinne advances the arguments he has developed over thirty years and addressed during meetings and commemorations with the last survivors, all of them witnesses or family members of the main protagonists. The 'construction' of the story is brought into question and the process of the film becomes a means of exorcising the spirits that emerge between the folds of the stories and their rectifications.

In addition to the film, the exhibition presents different objects from Brassinne's personal archive: photos from various trips during the 1960s and 1980s to 'real' places of execution, historical objects and audio footage. A substantial book comprising reference documents, photos and explanatory texts accompanies the exhibition.

On Sven Augustijnen's Spectres (2011) within the framework of the research project In and Out of Brussels: Aesthetics / Histories / Politics Between Europe and Africa (2010–2012), moderated by Professor T.J. Demos (University College London) and Professor Hilde Van Gelder (K.U.Leuven).

Film and project will be presented in other forms

23 July to 25 September at Kunsthalle Sankt-Gallen ; 8 October to 27 November 2011 at Kunsthalle Bern; 14 October 2010 to 8 January 2012 in de Appel, Amsterdam in association with Marres Maastricht