Presentation of the book by Pedro Barateiro and Ricardo Valentim, with contributions by Adam Pendleton and Alejandro Cesarco. With a performance 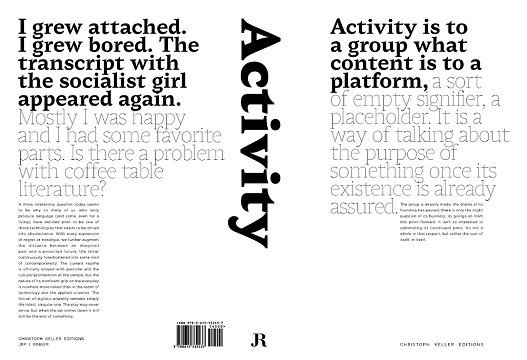 Presentation of the book by Pedro Barateiro & Ricardo Valentim, with contributions by Adam Pendleton & Alejandro Cesarco. With a performance by Adam Pendleton and a contribution by Alejandro Cesarco. Mediated by Pedro Barateiro and Ricardo Valentim, Activity is a collaboratively created artist's book authored by multiple individuals. With projects ranging from image-based dialogues to the production of social experiences, chain-letter style networks to outsourced interviews and email conversations, Activity gave total agency to the authors by providing them with a unique venue to demonstrate how their own personal practices relate to its themes. Barateiro and Valentim's withdrawal from their positions as the book's authors enabled the shared authorship of all the participants. Unlike the typical artist's book, which usually functions as an extension of an individual artist's practice, Activity instead represents a collective artistic experience, effectively rethinking the role of the artist's book today. The same concept has been extended to the format of the book launch, with New York based artists Alejandro Cesarco and Adam Pendleton invited. As Activity considers the book as a site of production, so the launch event will function in a similar manner, referencing the entire arena of action created by the project. Alejandro Cesarco is reprinting a letter by Christoph Keller to Roger Willems (originally published in Books Make Friends by Roma Publications, 2006) in the form of a bookmark. The letter is an inspirational text for anyone involved with book production or for those who simply love books. The bookmark will be distributed for free as a token of attendance at the launch. Adam Pendleton will stage a reading in 'no particular order' of some conversation passages in Activity, with the aim of creating a parallel conversation over the multiple voices present in the book. Authors: Authors: Liam Gillick, International Pastimes (Bosko Blagojevic and Stephen Squibb), Cecilia Alemani, Raimundas Malasauskas, Uqbar Foundation, Pedro Barateiro, Ricardo Basbaum, Artur Zmijewski, Oda Projesi, Fia Backstrom, and Ricardo Valentim. This publication is part of a series of artists' projects edited by Christoph Keller for JRP/Ringier, Zurich.