Rare Materials from the Howard Wise Gallery. A special screening of rare and never-before-screened archival materials, including films of kinetic art works, interviews, television footage, and rarely seen film documentation of the landmark 1969 exhibition TV as a Creative Medium. 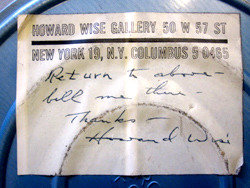 On the 40th anniversary of EAI's incorporation on August 17, 1971, EAI pays tribute to founder Howard Wise and the Howard Wise Gallery with a special screening of rare and never-before-screened archival materials, including films of kinetic art works, interviews, television footage, and rarely seen film documentation of the landmark 1969 exhibition TV as a Creative Medium.

Howard Wise was an innovative art dealer and a visionary supporter of video art. From 1960 to 1970, the Howard Wise Gallery on 57th Street in New York was a locus for kinetic art and multimedia works that explored the nexus of art and technology, presenting artists such as Len Lye, Takis, Jean Tinguely, and Group Zero. The gallery featured several groundbreaking exhibitions, including On the Move (1964) and Lights in Orbit (1967).

Wise's most influential exhibition was TV as a Creative Medium, the first in the U.S. dedicated to video as an art form. Featuring performances, single-channel tapes, video sculpture and multimedia installations by twelve artists—including the premiere of Nam June Paik and Charlotte Moorman's TV Bra for Living Sculpture—the exhibition served to link the kinetic and art and technology movements of the 1960s with the emergent medium of video art.

In addition to defining a burgeoning artistic movement, TV as a Creative Medium revealed the need for new paradigms to support artists working in video. In 1970 Wise closed the gallery; the following year he founded Electronic Arts Intermix as a nonprofit organization to foster creative projects in the nascent video medium.

LIGHTS IN MOTION: RARE MATERIALS FROM THE HOWARD WISE GALLERY is part of an ongoing series of events and projects marking EAI's 40th anniversary year. For more information about upcoming programs in this series, please click here.

Founded in 1971, Electronic Arts Intermix (EAI) is one of the world's leading nonprofit resources for video art. A pioneering advocate for media art and artists, EAI fosters the creation, exhibition, distribution and preservation of video art and digital art. EAI's core program is the distribution and preservation of a major collection of over 3,500 new and historical media works by artists. EAI's activities include viewing access, educational services, extensive online resources, and public programs such as artists' talks, exhibitions and panels. The Online Catalogue is a comprehensive resource on the artists and works in the EAI collection, and also features extensive materials on exhibiting, collecting and preserving media art: www.eai.org