Tirana Art Center presents Steve Piccolo's 'Panic Box' a Free Universal Messaging Booth, in collaboration with Tirana Ekspres... Everyone can send a vocal sound message to someone, a message to the whole world, maybe, to everyone and no-one. 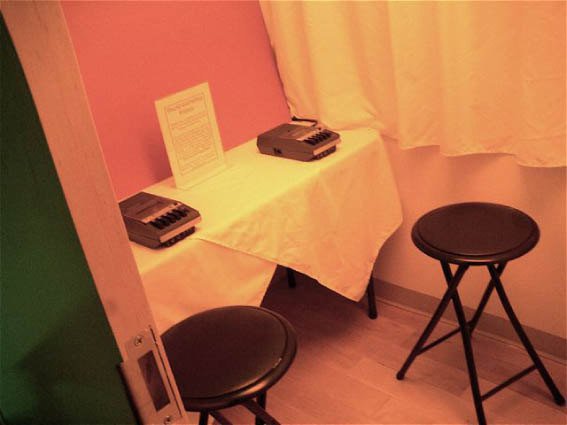 Tirana Art Center is proud to present Steve Piccolo’s “Panic Box” a Free Universal Messaging Booth, in collaboration with Tirana Ekspres… Send a vocal sound message to someone with whom you do not share any language. A message to the whole world, maybe, to everyone and no-one. What can you say only with wordless, pre- or post-verbal sounds? Fear, love, friendship, nervousness, anxiety, helplessness, frustration, lust, anger, pain, hate, sarcasm, desire, playfulness, disgust, serenity, fatigue, panic, curiosity, perplexity, complicity… all these things and much more, probably… Just push pause, record your ‘message’, then push pause again… Your message is completely anonymous. No one will know it was you who recorded it… If you want, leave an email address and we will send you a mix of the messages… aarrrggghhh… hmmmmm… ahhhh…

Steve Piccolo: born in USA. Education in New York (Bard College, New York University). Began career in 1970s playing bass in jazz groups and doing sound/performance in New York art spaces. In 1979 he started the Lounge Lizards with the Lurie brothers, a project which continued for about five years. Since then Steve’s activities have become too numerous, frequent and varied to summarize. Sound courses and research at University of Bergamo (2005), NABA Milan (since 2005), Accademia Carrara of Bergamo (since 2002) and Milan Polytechnic in Piacenza (2007-08). He has exhibited and/or performed at Swiss Cultural Center Milan, Documenta in Kassel, Palazzo delle Papesse Siena, Berlin Jazz Festival, Sardinia Arte Fiera, Technical Breakdown Copenhagen (2006), Battiti Radio RAI 3, WPS1 (MoMA NY) at Venice Biennial (2005), artist-in-residence at Turchin Center for the Arts Boone NC, with DE-ABC at Kettle's Yard, Cambridge England, with Elliott Sharp at Venice Music Biennial (2006), Casino Luxembourg (2009) choral projects at Milan Triennale and Babelfest Bellinzona Switzerland, videos at Loop Festival Barcelona (2010). He was sound curator at ArtVerona in 2008 and for the exhibition “Club 21” during Frieze 2010 in London, and recently showed work in the collateral event at the Venice Biennial 2011 “I Miss My Enemies” and the Festival of Imperial Gardens in St. Petersburg, Russia. He writes a monthly column on sound art for the magazine InSound, and curates the web archive on sound art for Undo.Net.