In 5 large-scale art events, artists investigate both the history and the more recent development of Bijlmermeer, a district of Amsterdam. They present temporary or (semi-) permanent projects that contribute to the area's heritage in situ. 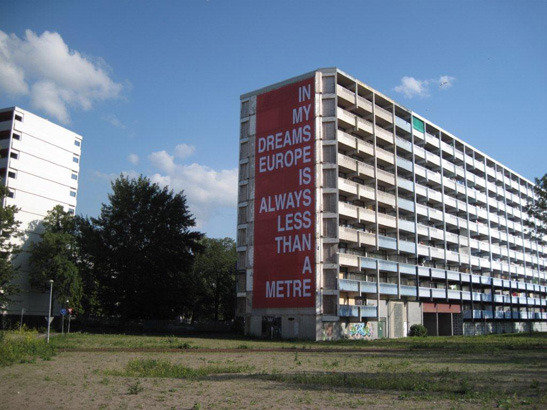 The Street of Sculptures is the organiser of a recurring art project in the public domain of the Bijlmermeer. In five large-scale art events, artists from the Netherlands and abroad investigate both the history and the more recent development of this renowned district of Amsterdam. The artists will be presenting temporary or (semi-) permanent projects that contribute to the area's heritage in situ, most of them newly created works.

The Third Sculpture (May–July 2012) investigates the relevance and impact of a large-scale art event for the specific architectural and social environment of the Bijlmer. The aim is to use art projects, which have for the most part been inspired by site-specific research, as a means to draw local, national and international attention to the Bijlmer's specific social and physical architecture in an innovative way.

The Third Sculpture International Conference functions as an introduction to the manifestation that will be staged in 2012. The Bijlmer is both the starting point and the subject. The symposium will explore ways in which visual art might actively function in this urban environment and within the specific social and economic context.

Is it possible to propagate an artistic legacy that establishes a connection between 'the collective' (the history, the collective memory, the interaction) and 'the autonomous' (the work of art), one that sparks a mutual curiosity and sets both aspects in a new light? Is it conceivable that artistic expressions will be absorbed into the social environment, and thus shift into a different context?

Image: Runo Lagomarsino, "In My Dreams Europe is Always Less than a Metre," Amsterdam, Bijlmermeer 2011.

For the full programme and further information, visit: www.thethirdsculpture.nl