Diagnoses/Interdiagnoses. Workshop, exhibitions, seminars. The project aims to reveal and represent social and cultural problems, as well as to involve into their interpretation representatives of the contemporary art - artists, critics, as well as activists from Armenia and other countries. 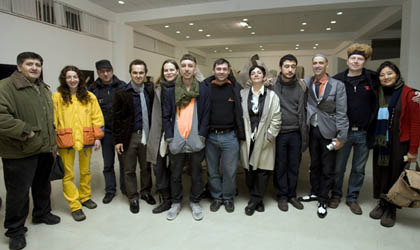 The themes of the Forum: East-West/Projection of the “Other”. Euro integration/Post-Socialist “euroremont”(euro repair). Post-Colonial / Post-Soviet. Urban transformations

Now every post-Socialist society is, to a certain degree, busy with correcting or re-writing its history and reinterpreting the past events. Because these efforts are not united any more, and there is no common national prospect, the variety in approaches and the diversity of interpretations may be taken for granted, but for a number of circumstances. The re-narration of the facts of the past and the efforts of representing the events that have fallen into oblivion, or have been oppressed or ignored, are now taking place, on the one hand, under the influence of unquestioned stereotypes of the Soviet tradition, and on the other, with the growing awareness to make cultural practices, artistic and critical approaches conform with the global context and the demand of markets. As a rule, these demands also push to uniformity. A number of meanings are brought forth by the concept of the Euro-repair that appeared in the post-Soviet era. The post-Soviet societies were offered the model of a new social being where promises for human rights, democratic and market principles dominated. On the other hand, Euro-repair involved numerous changes that had come forth in the post-Socialist countries with the introduction of above-mentioned new ide ologies, the problems of national identity and new subjectivities among them. The interference of Western superpowers into this process gave a new dimension to the stereotypical binary opposition West/East. Edward Said has illustrated in his book Orientalism how the Orient gets constructed when the latter is studied and constructed through “otherness” located in the ideological matrix of “lacking.” Similarly, the discourse of Orient exists in relation to the political and economic interests of those who speak and write about it. In this context the problem of the Other becomes more topical in the light of both the interdiagnosis of the parts of the world, and that of the marginal Other in any social context.Here we should also add a paragraph on the difference between the concepts of the Other and the Divers that have come forth in the philosophical discourse of the post-modern era. The difference between the “Other” and the Diverse is regarded to be ideological and not logical. Contrary to the rhetoric of multiculturalism, being the “Other” in the contemporary culture means being subjected to fundamental dispossession, i.e. political marginalization and discrimination. The “Other” is interpreted as unequal irrespective of the fact whether the “Other” is in a dominant or subordinate position. On the other hand, being “Diverse” means being equal but different. The years following the collapse of the Soviet Empire were a period of complex and contradictory transformations for the Armenian society. Recently a society has formed that is characterized by extreme social inequity and widely spread corruption, ignored democratic values, and a lack of stable prerequisites for a civil society. At the same time we are witnessing a constant visualization of the society, the spread of various image technologies, and the adoption of the means of representation (this being one of the most vivid cultural changes in the post-Soviet period). Globalization, in its turn, is certainly and in the first place a prospect inspired by the global media. This means that the perception of the current events as well as our view directed into the history is mediated by image technologies and certain strategies of representation.The above-mentioned changes manifest themselves in different ways, and one of them are the transformations of various urban spaces: that is to say, their disappearance, alterations, falling into oblivion, and so on. These spaces seemed to be able to denote signals of a new situation and new prospects. In the post-Soviet Armenian context these transformations were more vivid. The project aims to reveal and represent social and cultural problems, as well as to involve into their interpretation representatives of the contemporary art – artists, critics, as well as activists from Armenia and other countries. We believe that taking up responsibility for social issues will, at the same time, enable artists and theorists to overcome a number of hindrances and difficulties which are often remainders from the Soviet legacy. The above-mentioned issues are topical up to the present day and are open for artists and critics.

ACSL is the initiator of organizing the first institutional international Artist - in- Residence named “Art Commune” in post-Soviet Armenia, which operates all the year round. The goal of the "Art Commune" is the creation of a liberal democratic and intellectual space, where the residents will get the chance to cognize and research the visiting country – Armenia. Here open dialogues, interpenetration of different cultures, – personal, as well as interethnic, is stimulated with the help of radical creative interactivity with the vector directed to organizing topical projects.