Avant-premiere of 'Antigone jr', as part of Performa 11. 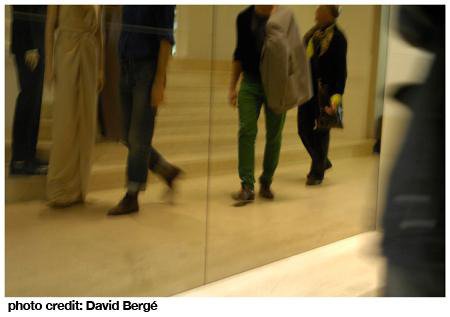 In this work, Harrell explores the role of Antigone from Sophocles' tragedy. Joined by performer Thibault Lac as Ismene, Antigone's sister, the piece will eventually morph into a much larger work entitled, Twenty Looks or Paris is Burning at the Judson Church (L). The performance is part of an ongoing series of the same title. Each is presented as a discreet work in a different 'size' - Extra Small (XS), Small (S), Medium also entitled (M)imosa, and the upcoming Large (L) and Extra Large (XL) - plus this irregular junior 'size'. Each piece takes on the proposition: "What would have happened in 1963 if someone from the Voguing dance tradition in Harlem had come downtown to Judson Church in Greenwich Village to perform alongside the early postmoderns?" Rather than illustrating a historical fiction, Harrell uses this proposition as a point of departure to explore it within a contemporary context. As a result, we are presented with Harrell's interpretation, one that is reflective of the here and now and that would not have been possible at the voguing balls nor at Judson Church. This jr. represents a potential uni-size in the series, both unique and unisex.