'Time out of Mind' focuses on the varied ways in which artists have engaged with ideas about time, memory, space, perception, change and similar concepts. The film '1395 Days Without Red' by Anri Sala and the American composer Ari Benjamin Meyers takes as its subject the siege of Sarajevo, one of the most emblematic events of the violent breakup of the former Yugoslavia. 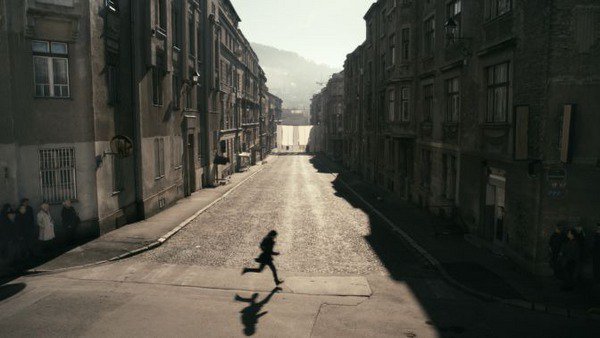 An exhibition exploring connections between art and science will mark the Irish Museum of Modern Art’s first presence in a city centre location when some 35 works mainly from the IMMA Collection go on show in the Museum’s temporary exhibition spaces at the National Concert Hall site in Earlsfort Terrace on Thursday 31 May 2012. Time out of Mind focuses on the many and varied ways in which artists have engaged with ideas about time, memory, space, perception, change and similar concepts. The exhibition is being organised in celebration of Dublin City of Science 2012. IMMA’s inaugural programme at the NCH also includes a striking film project by the Albanian artist Anri Sala and the American composer Ari Benjamin Meyers, inspired by the siege of Sarajevo, which is being shown in the nearby Annex.

Installed in the 14 galleries on the ground floor of the North Wing of the NCH building, the exhibition responds to the various cultural and intellectual layers of Earlsfort Terrace, in particular the building’s former scientific function as part of the National University’s Medical School.

Works are installed so as to offer new encounters and readings. For example, affinities may be felt between the filmed Liquid Archive animations of Carlos Amorales and the black Perspex sculpture Stalker by Eva Rothschild; while Tree by Niamh McCann, of reconfigured oars that arch over the space complete with a gilt-bronze flock of humming birds and white neon twig, relates to the minimally treated white panel diptych of Michael Craig-Martin, with small ‘readymade’ landscape paintings inserted in the top corner of each.

Since the 1960s many artists have adopted the type of serial methodologies associated with the objectivity of science. Some range across diverse scientific fields such as biology, chemistry, mathematics, physics, astronomy, acoustics and computer science. Yet while they may draw on scientific concerns and ideas, the artist’s central aim is to remain open to the experiental and to the possibility of failure, that turns out to be enabling rather than disabling: what the artist Tacita Dean calls ‘objective chance’.

Time and associated notions of permanence, impermanence and metamorphosis occur at many levels in contemporary art and are variously reflected in the exhibition. Tacita Dean, in Presentation Sisters, 2005, which is on loan from the Crawford Art Gallery in Cork, and Isaac Julien, in his three-screen video Paradise Omeros, 2002, demonstrate an awareness of the complexities of memory and time, such as the ambiguity of actual versus ‘felt’ time, and question assumptions about how memory operates. They are also concerned with how knowledge and ideas are transmitted within cultures and across time. Grace Weir’s film work, made at Dunsink Observatory, employs natural phenomena to investigate complex scientific theories of time and space. While Marie Foley’s sculptures, including The Last Judgement, 1991, explore the spirit within natural and man-made forms that reveal an inexorable transformation across time.

Dorothy Cross’s video piece Medusae, 2000, is inspired by her research in marine biology in collaboration with her brother, the scientist Professor Tom Cross. While Cristina Iglesias in Untitled (Vegetation Room X), 2002, and William McKeown in Hope Painting (Going Through the Looking Glass), 2005, make materially manifest that which is there but not always noticed in the physical world. They demonstrate an understanding of biological life-forms, not just in terms of appearance, but also in how they interact with the world around them. Like scientists both are drawn to these forms by a metaphysical agenda, such as the quest to understand the essence of life.

Art and science through the ages have been affected by the development of mirrors and optics. Through strategies and motifs of mirroring, reflection, distortion, duplication and proliferation, the effect on one’s perception of the world and of the self within it are explored in the works of Marcel Duchamp, Carlos Amorales, Lynda Benglis, Cristina Iglesias, Eva Rothschild, Mark Manders, Elizabeth Magill, Anita Groener, Stephen McKenna and Chung Eun-Mo. Some of these phenomena are seen in literal resemblances within and among artworks, others through subjective speculation. In other works notions of time, space and memory are signalled by the use of music or sound – either as structural elements or, implicitly, by means of a perceived cadence in works by artists such as Fergus Martin and Sean Scully.

As part of the exhibition programme, IMMA will invite artists to reflect on their works in the exhibition in the context of current developments and new directions, through discussions around the cultural aspects of science, the impact of science on art, and their ideas and personal philosophies. Curator Jobst Graeve has been invited to make a selection of works by Marie Foley in an installation which will accompany her sculpture The Last Judgement, 1991, which is in the IMMA Collection.

Cult of Engagement, 2009, by Clodagh Emoe will go on exhibition as part of Time out of Mind in the Annex at the NCH from 1 August, coinciding with the opening of Not I by Neil Jordan, also in the Annex building.

To coincide with the exhibition, the first in a series of public seminars entitled ART + will explore the subject of collaboration between art and science on Tuesday 10 July 2012 at Earlsfort Terrace. This includes a keynote address by Siân Ede, Arts Director of the Gulbenkian Foundation, followed by a discussion with panel speakers including Dorothy Cross and Tom Cross, Marie Redmond from Creative Technologies at Trinity College, Michael John Gorman, Director of the Science Gallery, and Mick Wilson, GRADCAM Fellow at NCAD.

In addition, to mark IMMA’s tenure in the NCH building, a series of lectures continues under the title Agents of Architecture in collaboration with the Irish Architecture Foundation. High profile international speakers have been invited to represent their involvement in the subject, their understanding of its definition, from the typical to the most unorthodox views. International speakers confirmed to present in the Autumn series 2012 at Earlsfort Terrace, include Anne Lacaton, Lacaton Vassal, Paris; Eva Franch, Director, Storefront for Art and Architecture, New York; alongside other national and international participants.

Admission to talks and lectures is free but booking is essential on www.imma.ie/talksandlectures

As part of a new audience building initiative for the NCH site, free guided tours of the exhibition for individual visitors and small groups will be available on Tuesday and Saturday at 4.00pm, Wednesday and Friday at 1.15pm and Thursday at 6.00pm. The exhibitions will remain open until 7.00pm on Thursdays.

The exhibition and related programmes are sponsored by Dublin City of Science 2012.
The exhibition is supported by THE IRISH TIMES and Feast Catering.

A striking film work inspired by the siege of Sarajevo will go on show as part of the Irish Museum of Modern Art’s inaugural programme in its temporary exhibition spaces at the National Concert Hall in Earlsfort Terrace on Thursday 31 May 2012. 1395 Days Without Red, by Albanian artist Anri Sala and American composer Ari Benjamin Meyers, will occupy the Annex at the NCH. The film takes as its subject the siege of Sarajevo, one of the most emblematic events of the violent breakup of the former Yugoslavia. The siege began 20 years ago this year, in 1992, and lasted for 1,395 days making it the longest siege in modern warfare.

During the siege thousands of citizens had to cross streets threatened by snipers everyday: to go to work, to buy food, to visit a relative. The citizens wore dark colours, for fear of alerting the snipers watching from the hills to their movements. In Sala’s film an elegant young woman makes her way through an empty city. At every crossing she stops, looks and listens. Should she wait or should she run? Should she wait for others or take the risk on her own? The city is Sarajevo, and the route the woman takes became known as Sniper Alley. Played by Spanish actress Maribel Verdú, she relives the trauma experienced by the citizens over almost four years. The 43-minute film is her individual journey through the collective memory of the city.

Throughout the siege, the Sarajevo Symphony Orchestra continued to play. In Sala's film, the orchestra rehearses Tchaikovsky's Sixth Symphony, the Pathétique. The musicians stop and start, repeating different sections of the symphony, just as the woman stops and starts in her journey across the city. Hearing the music in her head, she finds the courage to carry on.

On Friday 22 June at the NCH the RTÉ National Symphony Orchestra, in a first collaboration with IMMA, will performing Tchaikovsky’s ravishingly beautiful Pathétique symphony, heard to such effect in Sala film. Being presented under the title Beauty and brilliance, the concert is conducted by Christian Kluxen and also includes Rachmaninov’s soaring Third Piano Concerto performed by prize-winning Korean pianist, Ann Soo-Jung. The concert, part of the NSO’s Summer Evening Concert Series, begins at 8.00pm and will be broadcast live on RTÉ lyric fm. Tickets from €10.

Born in Tirana, Albanian, in 1974, Anri Sala is one of the most outstanding young artists working today. His works are meditations on slowness in which camera movement is practically non-existent. In contrast with the speed of images in the media, Sala often freezes scenes into still-shots in order to highlight apparently trivial details. Anri Sala was educated at the National Academy of Arts, Tirana; at the Ecole Nationale Supérieure des Arts Décoratifs, Paris; and at Le Fresnoy, Studio National des Arts Contemporains, Tourcoing. Sala has exhibited extensively, including the Tate Gallery, London, 2004; ARC, Musée d'Art moderne de la Ville de Paris, Paris, 2004; Kunsthalle Wien, Vienna, 2003; the Dallas Museum of Art, Dallas, 2002; and the Ikon Gallery, Birmingham, 2002. He is the recipient of numerous prizes, including the Young Artist Prize at the 49th Venice Biennale, 2001; the Prix Gilles Dusein, Paris, 2000; the Best Documentary Film Award from the Tirana International Film Festival (TIFF), 2000, and the International Film Festival +in Santiago de Compostela, 1999.

Artist Talk
At 6.00pm on Wednesday 30 May Anri Sala and Ari Benjamin Meyers discuss their collaboration with Declan Long, Lecturer in Visual Culture at the NCAD, in the Lecture Room at the NCH building. Admission is free but booking online is essential at www.imma.ie/talksandlectures

Launch of the Irish Museum of Modern Art's temporary galleries at the National Concert Hall: Wednesday 30 May 2012 from 4pm to 9pm