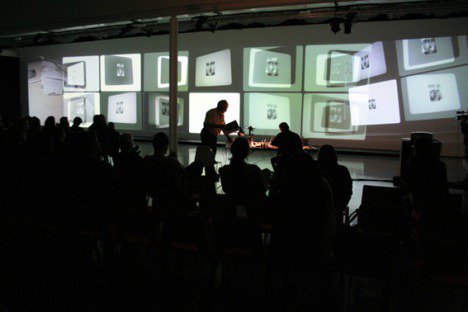 Filmaktion is the name used by a group of filmmakers who performed together during an intense period of activity in the early 1970s. The core members -Malcolm Le Grice (b.1940), William Raban (b.1948), Gill Eatherley (b.1950) and Annabel Nicolson (b.1946)- are major figures in the development of experimental film in the UK. In conjunction with the Filmaktion installation in the Tanks at Tate Modern, this special live performance in The Tanks on Saturday 20 October opens with a series of screenings by Malcolm Le Grice. With sound track provided by a live performance from AMM co-founder Keith Rowe, screenings will include Le Grice's After Leonardo (1973), Horror Film 1 (1971) and Threshold (1972). This event will be followed by live screenings by William Raban and Gill Eatherley. This event is related to the exhibition Filmaktion. Saturday 20 October.