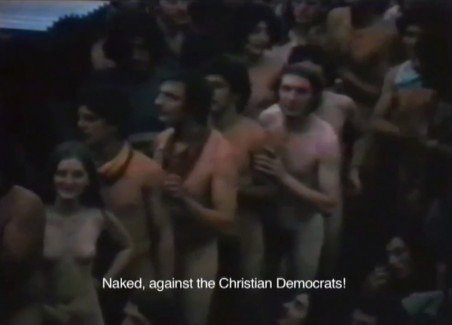 Il festival del proletario giovanile al Parco Lambro (1976), a documentary by Alberto Grifi. In 1976, the Parco Lambro Festival in Milan became the main event of the so-called Proletariato Giovanile (Proletarian Youth) movement. These were youths who, disappointed by the parties' politics, turned to counter-cultures. Grifi was hired by the festival organizers in order to film the concerts that took place. However, during those four days he recorded the anti-establishment atmosphere, the debates and confrontations that brought into conflict the festival organizers with the youths, that started with a disagreement over the price of the food sold on site. The documentary of the Il festival del proletariato giovanile al Parco Lambro is one of the few recorded testimonies to reflect the main struggle issues of that generation, their attempts at political organization and the new needs and requirements that were claimed. Alberto Grifi is considered as one of the very first filmmakers of what has been called the Italian Experimental Cinema. This event is part of "This is a special blackout edition!", an exhibition with works drawn from the Kadist collection, co-curated with the artist Rossella Biscotti.