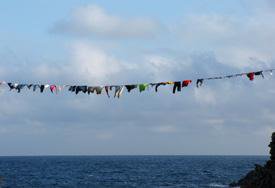 Curatorial Statement | The 2012 edition of Art Public marks my second year of collaboration with Art Basel in Miami Beach and the Bass Museum. The site-specific projects and outdoor works in sculpture, installation, video and performance span from the 1938 keystone façade of the Bass Museum in Miami Beach to Collins Avenue. Last year’s installation exposed a concentra- tion of critical and demonstrative gestures evoked perhaps most memorably by Andrea Bowers’s and Olga Koumoundouros’s Transformer Display of Community Information and Activation (2011), Bruce Conner’s LOOKING FOR MUSHROOMS (1959 – 65), Theaster Gates’s Stand-Ins for a Period of Wreckage (2011) and Glenn Kaino’s Levitating the Fair (2011). They reflected ideas surrounding collective efforts and belief systems rooted in the Occupy moment and spirit, while this year’s Art Public is more nuanced in its separation of parts as opposed to collaborative considerations of systems.

Art Public 2012 recalls Barthes’s distinction between ’speech’ (parole) and ’language’ (langue). Taking on the notion of speech as an essentially ’indi vidual act of selection and actualization,’ and as a ’combinative activity that corresponds to an individual act and not to a pure creation,’ the selection of works reflect altered content within language: the less malleable counterpart from which it emerges but with which it co-exists in reciprocal comprehensiveness. In other words, the works of art take cues and apply or imply meanings that derive from a common tongue, but they reorder and reintroduce curious utterances and phrases that connect to references outside of, but inevitably intertwined with, a specific lineage of modern and contemporary art. In essence, the speech acts represented by these disparate and variable works spring from, enable, converse with, and challenge systems or discourses such as: modern art and architecture; urban myth, monument and archive; and the language of banners, flags and signage, among others. Many of these works are unexpected in scale and delivery but grounded in their connection to – and the dialectics of – language and speech, interde pendent, where ’real linguistic praxis is situated,’ according to Merleau-Ponty.
Instead of the effort to ’weave more texture and openness into more conventional approaches to what is perceived as public art,’ as I wrote about Art Public 2011, Art Public 2012 understands and underscores langue and takes on parole through images, manipulations, forms and phrases.

Jason and Alicia Hall Moran’s performance inside José Davila’s Untitled (The Space Beneath Us) (2012), for example, situates poolside serenading, the rhetoric of leisure and aspects of film noir within the planar architecture of Davila’s reconsideration of landscape, modernism, color and abstraction. Teresa Margolles engraved concrete benches, inscribed with a narrative fragment of their material origins, and Miguel Andrade Valdez’s Monumento Lima, projecting documents of monuments of various types and conditions, consider the language of outdoor furniture and public monuments, and question their purpose and relationships to the viewer. Lastly, the function of messaging, signs and signage, in the forms of billboards, banners and flags, is reinterpreted throughout Collins Park by Dave McKenzie, Adam Pendleton, Ry Rocklen and Gary Simmons in text and in graphic languages. These examples and many others that make up this installation will be on view throughout the weekend.

Ugo Rondinone | I feel, you feel, we feel through each other into our selves, 2012
Gladstone Gallery | New York

General Information
Opening Hours | Art Public is open to the public all day from Dec 6 to Dec 9.
Free public access

Art Public Guided Tours | The Bass Museum of Art offers private and school groups tours of Art Public combined with a visit of their current exhibition: ‘The Endless Renaissance – Six Solo Artist Projects: Eija-Liisa Ahtila, Barry X Ball, Walead Beshty, Hans-Peter Feldmann, Ged Quinn, Araya Rasdjarmrearnsook’
Guided Tours | Wednesday Dec 5 to Sunday Dec 9
School groups | Wednesday Dec 5 to Friday Dec 7
Tours must be booked in advance | artpublic_tours@bassmuseum.org
Walk-In Tours | Thursday Dec 6 to Sunday Dec 9 at 10.30am, 11.30am and 12.30am
Free with museum admission: no reservations
Duration | 45min
Price | US $8 for adults, $6 for students.
Groups of 15 or more US $5 for adults, $4 for students
Tours start at the Bass Museum of Art.

Further information is available | MBCC, Info Zones B + D, Art Public Information Center and at the Bass Museum of Art.

Collins Park Café | by Atelier Monnier
Enjoy a coffee with French pastries and sandwiches.
Collins Park, between 21st and 22nd Street
Open daily from 11am to 5pm.
Art Public is ADA accessible