An all-night performance program with Pablo Bronstein, Dominique Gonzalez-Foerster and Sharon Hayes & Brooke O'Harra that investigates the relationship between theatricality, performance, and architecture against the backdrop of performance histories. 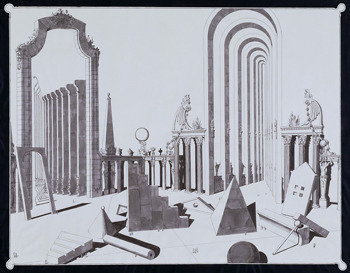 The Stedelijk Museum proudly presents Stage It! (Part 2), an all-night performance program with Pablo Bronstein, Dominique Gonzalez-Foerster, and Sharon Hayes & Brooke O'Harra. Inspired by the dramatic gestures and theatrical stages of the Stedelijk Museum's new architecture, Stage It! (Part 2) investigates the relationship between theatricality, performance, and architecture against the backdrop of performance histories. The Stage It! series is curated by Hendrik Folkerts (Curator, Public Program, Stedelijk Museum) in collaboration with Vivian Ziherl, Curator, If I Can't Dance I Don't Want To Be Part Of Your Revolution, Amsterdam.

As one walks through the Stedelijk Museum's revolving doors and into the entrance hall, the most striking element of the new architecture emerges: the former rear façade of the historical building is integrated into the central atrium as if it were part of a grand theater production's stage design. Embracing each other and challenging what is historical and contemporary, old and new, background and foreground, the re-opened Stedelijk Museum's dual buildings create new stages for performance in the 21st-century art museum. The central atrium—as well as other new spaces in the museum—is a performance space waiting to be explored, echoing the monumental staircase's long history of performance in the old building of the Stedelijk Museum.

In the Stedelijk's building, with its dramatic gestures and undeniable moments of theatricality, four artists explore the notion of "staging" further within the context of the art museum. This evening seeks not only to draw out parallels and overlaps between the spaces of performance in the visual and performing arts—the somewhat outdated concepts of the white cube and the black box—but also to question the increasing role of performance art in museums today and how architecture frames and determines it. Stage It! (Part 2) will follow a parcours along the vertical axis of the new Stedelijk building: the balcony in the central atrium, the space in the basement resembling a traditional amphitheater, and the Teijin Auditorium.

The first edition of the Stage It! series took place on September 27, 2012 as the inaugural performance event after the historical re-opening of the museum and featured performances by VALIE EXPORT, Andrea Geyer, and MPA.