Draw Without Looking. The artist opens the BMW Tate Live Performance Room 2013 series with a new work created especially for an online audience. 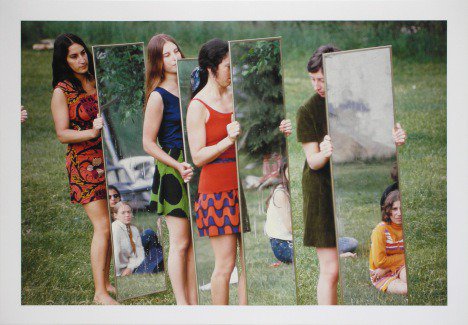 Joan Jonas, one of the most significant artists in the history of video and performance art, opens the BMW Tate Live Performance Room 2013 series with a new work created especially for an online audience.

Since the 1960s, Jonas has transcended genres to develop influential work rooted in space, movement, ritual and gesture. Jonas pioneered the use of film and video in performance, and later began to incorporate fairytales and folklore, turning away from the camera toward a more painterly, narrative and text-based practice. She has always combined traditional and new media in her work. The Juniper Tree, Jonas’s first UK performance at the Whitechapel Art Gallery in 1979, and now part of Tate’s collection, is currently on display as part of Tate Modern’s A Bigger Splash exhibition until 1 April 2013.

Jonas’s new work for the BMW Tate Live Performance Room will be unveiled as it happens, live and online on 28 February. Jonas, using her own teaching notes as source material, has devised and recorded a set of instructions in the form of a poem. These simple instructions ­– ‘draw for an audience’, ‘fold paper’, ‘make a mask’ and others – will be performed spontaneously by the artist and two of her art students in the Performance Room. They will have access to simple props – shapes, sticks, paper, woodblocks, bells, drawing materials – and perform against a backdrop of abstract video and music.

Audiences are invited to enter the online BMW Tate Live Performance Room via www.youtube.com/user/tate/tatelive at 20.00 hrs in the UK and exactly the same moment across time zones on the specified dates – 15.00 hrs on the East Coast of America, 21.00 hrs in mainland Europe and 23.00 hrs in Russia.

The global online audience are encouraged to chat with other viewers via social media channels during the performance and to put questions to the artist or curator for the live Q&A following, using their Twitter, Facebook or Google+ accounts. The latest updates will be available by following @TateLive, using #BMWTateLive; Tate Facebook; or Tate Google+.

This innovative format offers international audiences an opportunity to experience entirely new live works at Tate without leaving their computer screens and to join a discussion about the work online. Each performance is archived and available to view online after the live event. Previous artists in the series are Jérôme Bel, Pablo Bronstein, Emily Roysdon and Harrell Fletcher.