Hall at the Plazzet, Zuoz

Artists, literary figures and architects like Iso Camartin, Dan Graham, Bethan Huws, Katrin Sigurdardottir and Ernesto Neto speak on the topic of "Ghosts and the Uncanny". 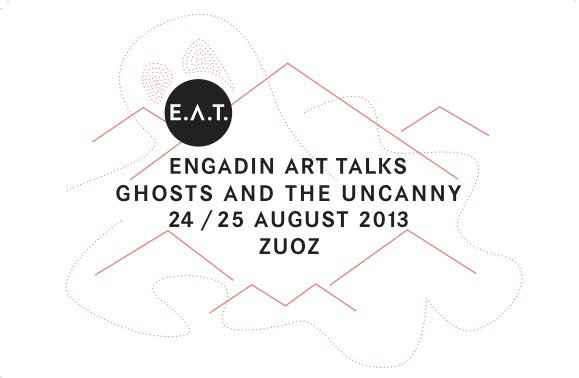 We are pleased to inform you about the art and architecture symposium Engadin Art Talks/E.A.T., which will take place for the fourth time in the Hall on the Plazzet (market square) in Zuoz, Switzerland, during the weekend of 24 and 25 August 2013. For the past three years, we have hosted renowned participants from around the globe, in the serene landscape of the Alps of Engadin. The location creates the perfect backdrop for engaged reflections, retrospectives and a variety of dialogues from the participants, panels and the audience. Previous artists and architects include Doug Aitken, Nairy Baghramian, Sarah Morris, Lawrence Weiner, Cerith Wyn Evans, and Annalisa and Peter Zumthor, among others.

This year, we have invited artists, literary figures and architects like Iso Camartin, Dan Graham, Bethan Huws, Katrin Sigurdardóttir and Ernesto Neto to speak on the topic of "Ghosts and the Uncanny." The symposium is aimed at connoisseurs, enthusiasts and interested observers. The lectures are held in German or English. Admission is free.

Ghosts, demons and apparitions belong to the world view of pre-scientific man. Due to our innate need to make sense of the world, meaning and intention were attributed to natural events, and people believed that they could 'understand' irrational and inexplicable events in this way. Ghosts or higher powers were assumed to lie behind all events caused by otherwise incomprehensible natural forces. In mountain regions, in particular, where humans were often defenseless in the face of nature and its power, this world view gave rise to a rich treasury of legends and sagas. These testify not least to the enormous respect that the residents of the Alps felt, and still feel, for the mountains. It is not surprising, therefore, that the world of the mountains with its powerful natural spectacles remains a source of inspiration for many people today.

At this year's Engadin Art Talks/E.A.T. we would like to find out how the mountains, their mysterious and mythical inhabitants, and the legends and stories they inspire stoke the imagination and creativity of the invited participants.

The panels are chaired by Hans Ulrich Obrist, Co-director of Exhibitions and Programmes and Director of International Projects at the Serpentine Gallery in London; Beatrix Ruf, Director of the Kunsthalle Zürich and Professor Philip Ursprung from the Swiss Federal Institute of Technology Zurich.


We are also delighted to present the publication Engadin Art Talks 2010-2012. An art and architecture anthology, which will be published by JRP Ringier in August 2013, at this year's E.A.T. The anthology contains the lectures by the participants who discussed and philosophised on the topics: "Die gläserne Kette" by Bruno Taut (2010), "Mapping the Alps" (2011) and "Visions for the Alps" (2012).

The symposium will conclude with a visit to the Chesa Planta in Samedan, where the exhibition Die magische Bergwelt in Daniel Schmids Filmen (The magical world of the mountains in Daniel Schmid's films), which is curated by This Brunner, can be viewed.

Die Engadin Art Talks were launched in 2010 by Zurich publisher and art collector Cristina Bechtler. Her aim is to create a temporary location for a dialogue about the arts, and hence perpetuate the history of the Engadin as a place for focussed thought and discussion. Cristina Bechtler succeeded once again in attracting renowned curators Hans Ulrich Obrist and Beatrix Ruf as Artistic Directors for this year's event.

E.A.T. 2013 programme
(The detailed programme of events will be published a few days before the event on www.engadin-art-talks.ch.)

More information on the event can be found on the website: www.engadin-art-talks.ch.

The two-day symposium will be staged as part of the St. Moritz Art Masters 2013 (23 August–1 September 2013). The complete programme for this event can be found at www.stmoritzartmasters.com.

stampa
permanent link
Hall at the Plazzet
IN ARCHIVIO [1]