Redesigned for 2013, Frieze London brings 152 of the world's leading contemporary galleries to the UK this October. The change in the design of the fair will introduce more sizable public areas and wider aisles as well as a new layout of galleries. The artists commissioned to make site-specific work for Frieze Projects 2013 are: Andreas Angelidakis, Gerry Bibby, Rivane Neuenschwander, Ken Okiishi, Angelo Plessas, Lili Reynaud-Dewar and Josef Strau. The 2013 Emdash Award recipient is Pilvi Takala. 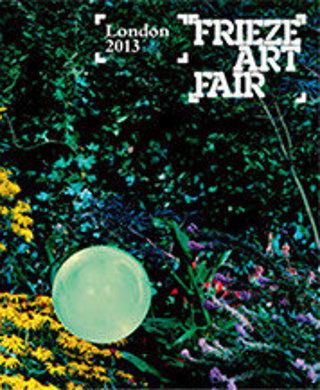 Redesigned for 2013, Frieze London brings 152 of the world’s leading contemporary galleries to the UK this October. The change in the design of the fair will introduce more sizable public areas and wider aisles as well as a new layout of galleries.

Exhibitors from 30 countries will participate in the 11th edition of the fair confirming the fair’s position as one of the world’s leading contemporary art events. This year’s gallery list includes those from territories including Brazil, China, Columbia, Hungary, India, Korea, Mexico and South Africa.

The selection of the Frame galleries was advised by curators Rodrigo Moura and Tim Saltarelli.

For the second time Frieze will present Frieze Masters, to coincide with Frieze London, a new fair with a contemporary perspective on historical art. Together the crossover between the two fairs build a broad international art audience.

Newly appointed this year, Nicola Lees is the curator of Frieze Foundation and has conceived a programme of commissions that centres around ideas of play and governance, focusing on how these exchanges can be brought to light through participatory contemporary art practices. Frieze Projects is the programme of artists’ commissions realised annually at Frieze Art Fair and supported by the Emdash Foundation.

In addition to commissioning these five new works, the programme will also explore the process and conditions of commissioning artist films with a think tank (16 October 2013) and a panel discussion (18 October 2013) in the Frieze London auditorium. Entitled ‘New Partnerships Between Art & Film’, the think tank and panel have been developed in collaboration with CPH:DOX, the CineMart of the International Film Festival Rotterdam (IFFR) and LUX, and are programmed by ART:FILM.

Jérôme Bel, Meredith Monk and Stephen Shore are all part of the line up of international artists, filmmakers, curators and cultural commentators taking part in Frieze Talks 2013.

Frieze Talks is a series of lectures, conversations and panel debates that take place during the fair in the auditorium at Frieze London. The talks programme provides a forum to discuss some of the most pertinent issues in contemporary art and culture today. Presented by Frieze Foundation, Frieze Talks is programmed by the editors of frieze magazine, Jennifer Higgie, Jörg Heiser and Christy Lange.

We are pleased to announce that for the fifth year Champagne Pommery will generously sponsor the Stand Prize. The prize of £10,000 will be awarded to the most innovative gallery stand at the fair. The following international curators and critics will select the winning stand: Michelle Cotton, Head of Programmes, First Site Colchester; Defne Ayas, Director Witte de Witte Center for Contemporary Art and Giovanni Carmine, Director Kunsthalle Sankt Gallen. The prize will be awarded at 4pm at the fair on Wednesday 16 October.

This is the eleventh year of the unique partnership between Outset, Frieze and Tate. Based on the generosity of Outset, a charitable foundation focused on supporting new art, the fund enables Tate to buy important works at the fair for the national collection. With a fund that has totalled over £1million over the duration of the partnership, 90 works by 61 significant international artists have been collected since 2003. The Fund is organised and financed by Outset Contemporary Art Fund and enjoys continued support from Le Méridien Hotels & Resorts for the sixth consecutive year. Additional funds in 2013 are provided by Leviev Extraordinary Diamonds.

Allied Editions is a collaboration between: Camden Arts Centre, Chisenhale Gallery, Institute of Contemporary Arts (ICA), Serpentine Gallery, South London Gallery, Studio Voltaire and the Whitechapel Gallery. At a booth in Frieze London each gallery will feature a portfolio of limited-edition artworks that have been specially made and donated by the artists in support of each gallery’s exhibition and education programmes.