Inauguration Ceremonies. The exciting inaugural exhibitions and the month-long slate of celebratory events planned at the gallery. 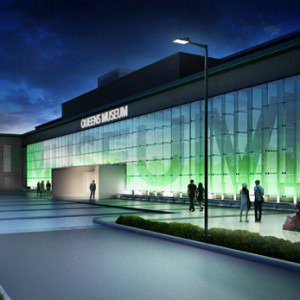 Inauguration Ceremonies from Around the Borough and the Globe

Target Wide Open Weekend at the Queens Museum begins with inauguration ceremonies from around the borough and the globe. This will be the opportunity for communities to tell us how they would open a building and bless our new space. How do you inaugurate a space in India, Bulgaria, Mexico, or Taiwan? Inauguration by Queens International 2013 (QI) artist from the Bulgarian Collaborative, Vlada Tomova‘s Bulgarian Women’s Choir A! Capella! Blessing! will start the ceremonies.

11 – 2 pm
QI artist Lynley Bernstein‘s Fishing for the Elusive Snakehead, a 2.5-hour guided fishing trip in search of the infamous Snakehead fish identified by the city authority to inhabit waterways in Flushing Meadows Corona Park. Once caught, it must be submitted to the city. Gears and Baits provided.

2 – 4 pm
Poets in the Galleries: Tan Lin
The Poets in the Galleries series utilizes the Museum’s exhibition space as an invigorating site for exploration, interactive readings and discussions. For four Saturdays in November and December 2013, a different poet will conduct a lively presentation in response to the Museum’s current biennial of Queens-based artists, Queens International 2013.

Today features poet Tan Lin. Tan Lin is the author of Lotion Bullwhip Giraffe, BlipSoak01, Ambience is a Novel with a Logo, Heath (Plagiarism/Outsource), 7 Controlled Vocabularies and Obituary 2004 and The Joy of Cooking (2010). His work has appeared in numerous journals including Conjunctions, Artforum, Cabinet, New York Times Book Review, Art in America, and Purple. His video, theatrical and LCD work have been shown at the Marianne Boesky Gallery, Yale Art Museum, Sophienholm Museum (Copenhagen), Ontological Hysterical Theatre, and as part of the Whitney Museum of American Art’s Soundcheck Series. Lin is the recipient of a Getty Distinguished Scholar Grant for 2004-2005 and a Warhol Foundation/Creative Capital Arts Writing Grant to complete a book-length study of the writings of Andy Warhol. He has taught at the University of Virginia and Cal Arts, and currently teaches creative writing at New Jersey City University.

3 – 6 pm
Opening in the Museum’s Community Partnership Gallery: An Inclusive World, a group exhibition organized by COPE NYC, a program that examines how art transforms the lives of those with a wide array of needs and abilities, including those deemed “Outsider Artists.”

4pm onwards intermittently
QI artist Matthew Volz‘s Meanwhile Back in Queens…, a live concert in collaboration with the Juan Wauters with Carmelle Safdie

5:30 – 6:30pm
Rosa de los Vientos. Winds Rose, a performance by Maria Magdalena Campos-Pons and Neil Leonard in celebrating the reopening of the Museum and the opening of Citizens of the World: Cuba in Queens.