The Fire Next Time

Afterlives of the Militant Image. A two-day programme of interventions, screenings and an exhibition dealing with the militant image and its resonances. 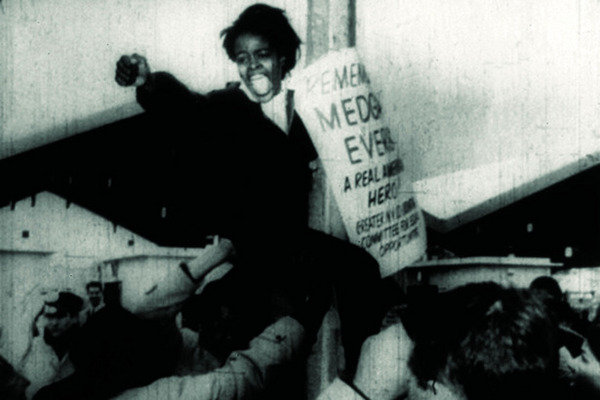 There was a time when cinema was believed to make a difference, to be able to act as a weapon in struggle, to operate as a realm of discord. The so-called “militant cinema” was not only considered as a tool to bear witness but also to intervene in the various political upheavals and liberation movements that shook the world in the 1960s and ‘70s. What remains of this unassailable alliance between cinema and politics? After the flames had died down, all that seemed to be left was a wreckage of broken promises and shattered horizons. Today it feels like we have been living through a long period of disappointment and disorientation, while the sense of something lacking or failing is spreading steadily. An overwhelming melancholy seems to have taken hold of our lives, as if we can only experience our time as the “end times", when the confidence in politics is as brittle as our trust in images.

Perhaps that is why, for those who came after, there is a growing tendency to look back at an era when there was still something to fight for, and images were still something to fight with. Can a re-imagining of old utopian futures shed a new light on our perceived dead-end present, in view of unexpected horizons?
Can an understanding of past dreams and illusions lead to reinvigorated notions of responsibility, commitment and resistance? Can a dialogue with the period in question help us to find the very principles and narratives capable of remedying its impasses? And how can this questioning help us to think about how cinema, unsure of its own politics, can be “political” today? In light of a potential rebirth of politics, would it still be possible for the art of cinema to appeal to the art of the impossible?

The Fire Next Time is organized in conjunction with the exhibition L'œil se noie, Eric Baudelaire and Mathieu Kleyebe Abonnenc in KIOSK (05/04 – 15/06/2014), in the context of the research project Figures of Dissent at the School of Arts and in collaboration with the Courtisane Festival.

The Fire Next Time is organized as part of The Uses of Art – The Legacy of 1848 and 1989, a project initiated by the museum confederation L’Internationale with the support of the Culture Programme of the European Union.

With the support of the research groups S:PAM & PEPPER (UGent), art centre Vooruit, BAM institute for visual, audiovisual and media art, Embassies of France and Mexico, Eye on Palestine. Thanks to KASKcinema and Minard.

The Fire Next Time events are free, except for the Julius Eastman concert. Concert: €10 box office​​ / €8 presale. Seats for the events in KASKcinema are limited. Please book in advance by sending an email to stoffel.debuysere@hogent.be

Full programme and practical details on the web site.