The performance of the musical collective is accompanied by a range of discussions in an event titled "ALLGOLD Presents: Underground - An Indefinite Community?" 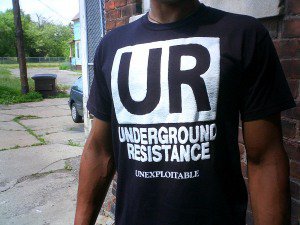 MoMA PS1 is pleased to announce that Kevin Beasley, Inva Cota, Golnaz Esmaili and Stephen Decker, the four members of artist collective, ALLGOLD, are participating in a residency program initiated in October 2014 at The Print Shop at MoMA PS1. ALLGOLD has selected Underground Resistance, the seminal Detroit-based musical collective known for its politically-motivated techno, to kick off the residency with a rare performance in New York on Sunday, December 14 at MoMA PS1. Underground Resistance will be accompanied by a range of additional performances, and discussions in an event titled "ALLGOLD Presents: Underground - An Indefinite Community?" The residency offers ALLGOLD the opportunity to start an artist-run space located in a storefront on MoMA PS1's block. In close proximity to the institution, yet, independent from its programming, the collective will create a social space to foster communities in which new ideas and thoughts can manifest and find an audience.