Make yourself at home. The performance is based on a sequence of events, interactions, things that occur without audience or with the collaboration of random witnesses. 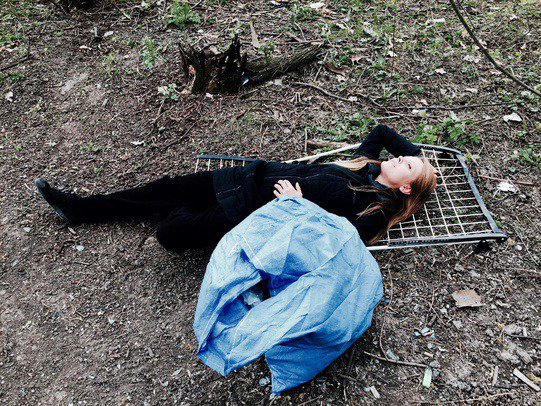 The performance by Honorata Martin in Bródno Sculpture Park is related to the problematic of survival, exchange and hospitality as well as escapism. It is based on a sequence of events, interactions, things that occur without audience or with the collaboration of random witnesses.

The artist is temporarily living in the city park of Bródno, using this green enclosure as a temporary home. Because of the specificity of the project there is no clear beginning, only the conclusion, which will be the meeting with the artist after the performance comes to its end. The idea of inhabiting a city park brings up inevitably the question of derangement, the need to create new ways to communicate in a world where the current political and economic foundations are being thrown into question.

The art of Honorata Martin takes place in real time, in a 1:1 scale. The logic of an event gives way to explore the need of continuity and (co)existence. Martin is a radical performer who works with non-radical material, i.e. the world around her (people, animals, buildings, streets, river, etc.) as well as her own emotions and experiences. Until now her art has been emerging from experience, while she was wandering through the solitary areas of the second-class Poland or renovating an old tenement house. Many of her activities relate to the idea of breaking through the limitations set by her own body or the social taboos. She has hung down a balcony of a block of flats, dived into a river-sewage in winter, let her friends come to her house and take away her belongings.

Honorata Martin treats art as a natural prolongation of vital functions: eating, sleeping, walking and sometimes mourning or fear. Most of her works seek to escape the formula of an exhibition or an artistic event. Her art involves risk, as it has to do with testing her artistic skills (not only manual capacity but also the ability to build temporary communities or to confront the viewers with their own, repressed desires). It moves away from the safe walls of any art institution that would legitimize its importance.
“Off into Poland”, the most commonly known project of Honorata Martin, was based on a solitary wandering that started in the summer of 2013 in Gdańsk. The journey, with no pre-estabilished plan, concluded after two months when Martin reached the city if Dzierżoniów in Lower Silesia. During the activity we can experience the most typical trait of her creation: it takes place between the artist and random on-lookers, without the mediation of institutions and their rituals. It also creates temporary enclosures of communication, acceptance, exchange. The act of documenting those activities was of secondary importance to the artist, not more than a report from some banal worlds, a pure shift of everyday life.

Just as in the practices of Paweł Althamer, who iniciated the creation of Bródno Sculpture Park, a deep, insightful experience does not have to be based on a faraway journey, just the opposite, it is usually created in the act of immersing oneself in the exotic domesticity.

The artistic practice of Honorata Martin has a post-institutional character. In a way it is reminiscent of the art of the 70’, based on the premise of breaking through the limitations of one’s own body and the passing of time, where the limits between the artistic activity and everyday life fade away, just as it occurred, for example, in the performances by Tehching Tsieh, Lee Lozano or Bas Jan Ader. Her art, however, is deeply rooted in the specific social reality of a 22st century Poland, to which the artists turns with a whole burden of her personal fears and fantasies.