Performance Retrospective. In the Issue Project Room a two-evening of collaborative performance works by the poet and the musician. 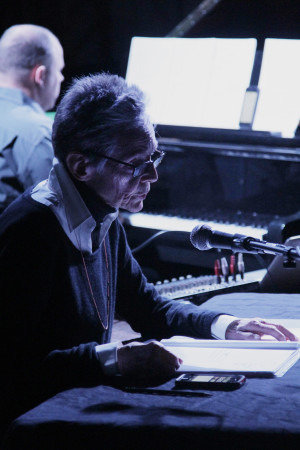 The Museum of Modern Art is pleased to host ISSUE Project Room for a two-evening retrospective of collaborative performance works by poet Susan Howe and musician David Grubbs. Author of more than a dozen books of poetry and three of literary criticism, Susan Howe held the Samuel P. Capen Chair in Poetry and the Humanities at the State University New York at Buffalo until her retirement in 2007.
Her recent collection of poems, That This (New Directions), received the 2011 Bollingen Prize. David Grubbs has released 12 solo albums and is the author of Records Ruin the Landscape: John Cage, The Sixties, and Sound Recording (Duke University Press).
Grubbs was a member of the groups Gastr del Sol, Bastro, and Squirrel Bait, and he has performed with the Red Krayola, Will Oldham, Tony Conrad, Pauline Oliveros, and Loren Connors, among many others. Grubbs and Howe were brought together when the Fondation Cartier in Paris proposed a collaborative performance in 2003.
Grubbs had been a dedicated reader of Howe’s work for more than a decade, and the opportunity to work with Howe’s poetry and voice immediately intrigued him. The pair has since created four full-length works that they have presented widely in the U.S. and Europe. Four CD releases have appeared on Drag City’s Blue Chopsticks imprint, and their long out-of-print 2004 debut album, Thiefth, will be released for the first time on LP by ISSUE Project Room’s Distributed Objects label in September 2015.